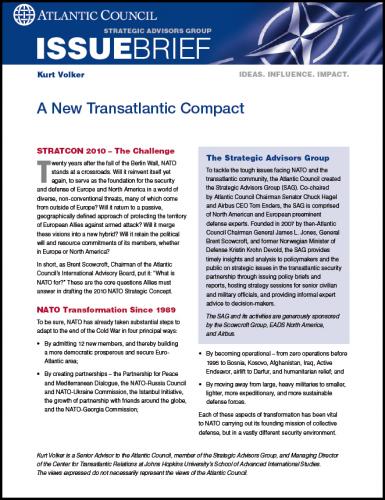 Kurt Volker, Atlantic Council senior advisor and member of the Strategic Advisors Group (SAG), describes the challenges facing NATO and calls for unity to the divergent goals and ambitions of member states in the SAG issue brief “A New Transatlantic Compact.”

Twenty years after the fall of the Berlin Wall, NATO stands at a crossroads. Will it reinvent itself yet again, to serve as the foundation for the security and defense of Europe and North America in a world of diverse, non-conventional threats, many of which come from outside of Europe? Will it return to a passive, geographically defined approach of protecting the territory of European Allies against armed attack? Will it merge these visions into a new hybrid? Will it retain the political will and resource commitments of its members, whether in Europe or North America? In short, as Brent Scowcroft, Chairman of the Atlantic Council’s International Advisory Board, put it: “What is NATO for?” These are the core questions Allies must answer in drafting the 2010 NATO Strategic Concept.