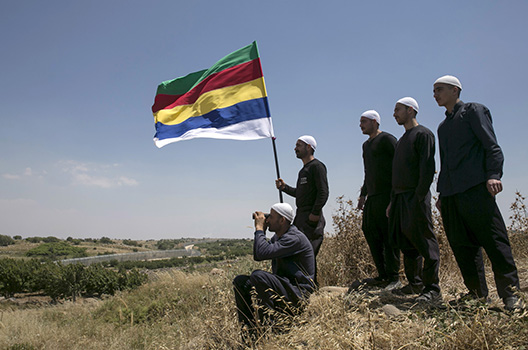 Despite the many external players involved, the Syrian war is ultimately a local conflict. In “Seizing Local Opportunities in Syria,” authors Faysal Itani of the Atlantic Council’s Rafik Hariri Center and Co-Founder of People Demand Change Bassam Barabandi identify three opportunities on the ground for the United States to develop partnerships with segments of the Syrian population. By taking advantage of these openings, the United States can help further its goals of facilitating a lasting political transition and weakening jihadists in Syria. These opportunities include encouraging a Sunni-Druze coalition in the south and an Arab-Kurdish one in the north, as well as deepening contact with Jaish al-Islam (JAI) in the Damascus suburbs of Eastern Ghouta.

Itani and Barabandi present actionable insights and concrete recommendations that align fully with the US objectives of defeating violent extremists and facilitating an inclusive political transition that preserves as much governance capability as possible.

The authors explain how the United States can facilitate a rebel-Druze alliance in the south by providing the Druze security guarantees and linking the level of US material support to the insurgents to their respecting Druze territorial red lines. This would help Druze and other minorities recognize they need not choose between the Assad regime and jihadists, thereby narrowing the regime’s support base and broadening participation in a political transition.

In the north, the authors recommend helping to strengthen the relationship between the Arabs and the Kurds by increasing the US partnership with the Arabs, while also supporting local governance in areas under Arab-Kurdish control. This would enable greater territorial gains on the frontlines with the Islamic State of Iraq and al-Sham (ISIS or ISIL) and create a balance of power more palatable to the Arabs and Turkey resulting in a more durable Arab-Kurd partnership.

In Eastern Ghouta, the authors acknowledge JAI as a strong but problematic actor, and encourage engagement to curb its worst excesses and to increase pressure on the regime. They contend that an isolated yet still powerful JAI would pose a greater problem than one with which the United States had substantive relations.

Through each of these local opportunities, Itani and Barabandi demonstrate how the United States can apply pressure on the regime and its patrons by broadening the support base against both the regime and jihadists. Their recommended steps could thereby hasten an end to the civil war while helping to bring about a more inclusive and enduring political settlement.