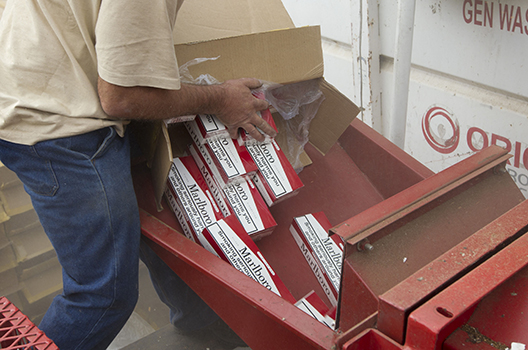 A government worker destroys counterfeit cigarettes in Durban June 24, 2011. The Tobacco Institute of South Africa together with the South African Revenue Service have destroyed a total of 225 million illicit cigarettes this year. REUTERS/Rogan Ward

This groundbreaking study of the illicit tobacco trade in southern Africa explores how this trade supports organized crime, helps enable official corruption, and erodes state structures. A major feature of South Africa’s, and to a lesser extent Zimbabwe’s, political economy revolves around conflict—overt and covert, violent and non-violent—over who makes the most money from the illicit tobacco trade, who controls that trade, and how the state responds to it. This conflict now takes places in the midst of huge political transitions within the ruling parties of both countries.

The study maps the key dimensions of the illicit cigarette trade in Zimbabwe and South Africa, including the key actors, the pathways of trade and the accompanying ‘modalities’ of criminality, as well as other important dimensions of the illicit cigarette market in southern Africa. It identifies “good-faith actors,” primarily in South Africa, whose positions could be strengthened by policy and technical interventions, explores opportunities for such intervention, and assesses the practical solutions that can be applied to combat illicit trade and tax evasion in the tobacco industry.

The study should be of interest to those policymakers, experts, and the general public who want to expand their awareness of the nexus between this illicit trade in otherwise licit goods, official corruption, and organized criminal networks.