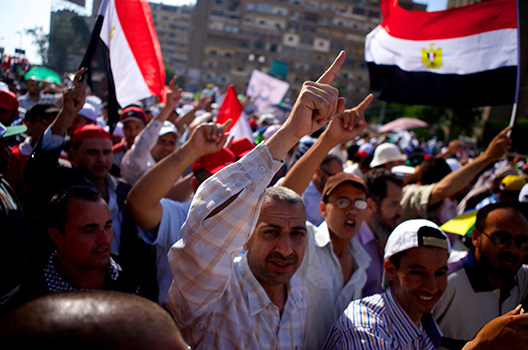 The postponement of parliamentary elections in Egypt, scheduled for March 2015, marked a setback in the country’s democratic political process. Electoral politics are effectively on hold. Meanwhile, Muslim Brotherhood supporters have adopted a violent confrontational strategy toward the state, secular opposition parties are increasingly ineffectual, and voter fatigue remains a serious dilemma.

In “To Vote or Not to Vote: Examining the Disenfranchised in Egypt’s Political Landscape,” the Atlantic Council’s Sarah El Sirgany assesses the electoral environment in Egypt. She examines voter apathy, particularly the sort fueled by marginalization and disenfranchisement, and explains the deterioration of the Islamists’ electoral gains and the rising trend within the Muslim Brotherhood of eschewing electoral participation in favor of violent confrontation. She also outlines the challenges that secular parties face.

Sirgany argues that while the 2011 uprisings encouraged a new political space—one as reliant on party platforms and ideology as the traditional interest-based campaigning—that has since narrowed. The traditional process remains entrenched, a situation exacerbated by the 2014 decision allocating 420 seats in parliament to independents and only 120 seats to party lists. Small parties that emerged following the 2011 revolution remain at a disadvantage, and many suffer from a lack of credibility.

Sirgany proposes that in order to reignite voter confidence in the electoral process, parties should invest in developing political platforms that promote democratization, not merely self-interest. Islamists and secular opposition parties alike should promote participation, rather than seek to derail the current regime through violence or boycotts. However, Sirgany argues that the onus for electoral progress is ultimately on the state. Political pluralism and inclusive participation, rather than repressive political policies, are necessary to revive the democratic process in Egypt.

Image: Supporters of Mohamed Morsi took to the streets after the former President was ousted from power in July 2013. Photo credit: Gregg Carlstrom/Flickr.