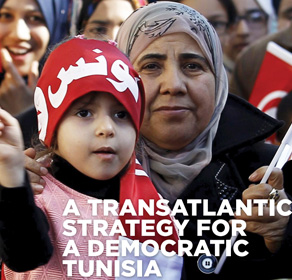 Five years after Tunisia’s revolution, which ousted longtime authoritarian ruler Zine El Abidine Ben Ali and put the country on the path towards nascent democracy, democratic and economic reforms have stalled. Following the revolution, the United States, the European Union (EU), and EU member states—namely France, Germany, and the United Kingdom—substantially boosted assistance to Tunisia. But simply increasing support has not proven to be effective. To help Tunisia as it moves away from the immediate post-revolutionary period, the United States and the EU must develop a joint transatlantic strategy that recognizes Tunisia as a priority for Western engagement with the Arab world.


Tunisia faces major challenges in the key areas of economic development, security, and democratic development. The government has failed to undertake needed economic reforms, and socioeconomic discontent, which was a major driver of the revolution, has been exacerbated by continued marginalization of the interior regions. A tenuous security situation has also contributed to economic stagnation, as terror attacks in 2015 led to the deterioration of the country’s tourism industry. And in the absence of substantial reforms to the security sector, the ability of Tunisia’s security forces to both maintain stability and respect basic citizens’ rights remains uncertain. The United States, the EU, and key EU member states can take clear steps as part of a renewed transatlantic strategy to address and help Tunisia meet these challenges.

On the economic front, the United States and Europe should pledge a joint package in aid, investment, and trade benefits worth at least $2 billion a year for the next five years. All initiatives and support should be measured against whether they will have a direct impact on youth unemployment and regional economic disparities. A division of labor among donors that allows for the consolidation and coordination of economic assistance is also paramount.

European and US security assistance should focus on bolstering the capabilities of Tunisia’s security actors, while also supporting critical reforms in the security sector. The United States and Europe should also support key actors outside of the security agencies while simultaneously working closely with the government on crucial issues such as border security.
Finally, a joint US-European strategy should recognize that the long-term success of Tunisia’s democracy will depend on the depth of political progress rather than on tightened security measures. Democracy assistance should go beyond support for elections and focus on helping Tunisia build effective democratic institutions of government. The United States and Europe should also use both public and private diplomacy to urge Tunisia to respect its domestic and international human rights obligations.

The West must match its strong rhetorical support for Tunisia’s future with an increase in targeted, coordinated assistance that makes clear Tunisia’s priority status. While the ultimate responsibility for reform lies with Tunisia, the United States and Europe can play a much more effective role in helping the country achieve greater stability and democracy. But without action soon, Tunisia may succumb to the many challenges it faces.

This report has been produced as part of a two-year initiative supported by the EU Delegation in Washington, DC, to advance transatlantic dialogue on support for political and economic reform in the Arab world.