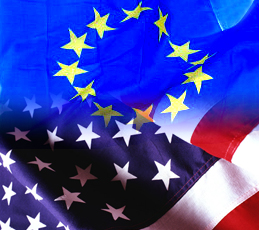 With the fall of the Berlin Wall, the face of Europe has been transformed. Most Americans have focused on the geopolitical and security dimensions of these changes, overlooking another signifi cant aspect: the evolution and expansion of the European Union. Europe today is a unique construction, comprised neither of individual, sovereign states, nor of a single unitary state, but something in between. Th is construction has its imperfections, but it is durable. Even after the French and Dutch electorates rejected the EU’s proposed Constitutional Treaty in 2005, the EU remains the central political institution in Europe.

U.S.-EU relations, which reached a nadir with the invasion of Iraq, began to improve with President Bush’s visit to the EU in February 2005. After the June 2006 U.S.-EU summit in Vienna, Bush described his hopes for the future: “[W]hen America and the EU work together, we can accomplish big deeds.” And indeed, despite the many ties that bind the United States to other continents and countries, Europe remains the region most likely to share U.S. goals of democracy, market economics and rule of law. It also off ers the most potential for eff ective global partnership with the United States. At the same time, however, the EU can be a formidable opponent. It can either enhance U.S. policy significantly – or thwart it.

Unfortunately, the U.S. government is not organized to support the positive vision laid out by President Bush. Nor does it have a coherent approach toward the EU that synthesizes both the cooperative and competitive aspects of the U.S.-EU relationship. Today, most federal agencies in Washington still see Europe as a continent of independent countries, in which the large countries, such as the United Kingdom, France or Germany, along with NATO, are the key players.

U.S. officials often lack the expertise to understand and interpret EU policies and actions. They know too little about EU institutions, or about the shifting power relationships among them. Nor do they understand the complex links between the central authorities and national governments. Finally, the U.S. government as a whole lacks the senior-level attention to EU matters as well as the interdisciplinary fl exibility required to deal successfully with the EU.

This study reviews briefly the ways in which the EU has evolved over the past decade and a half and identifies the ways in which it already influences U.S. policies and actions. It then sets out guidelines the United States should use to advance its interests with the EU.