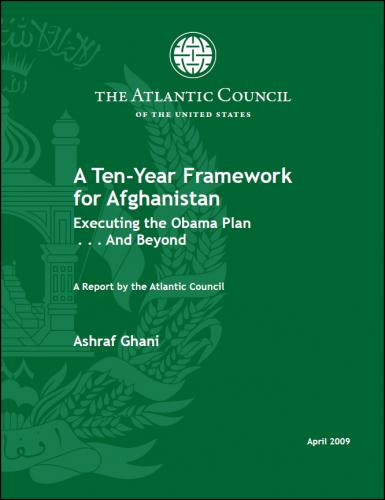 Describing the situation in Afghanistan and Pakistan as increasingly perilous, President Obama has committed his administration to enhancing the military, governance, and economic capacity of the two countries.  Chairman of the Institute for State Effectiveness and former Afghan Minister of Finance Dr. Ashraf Ghani outlines a medium-term framework for state-building in Afghanistan for the Atlantic Council in A Ten-Year Framework for Afghanistan: Executing the Obama Plan and Beyond.

On March 27, 2009, President Obama announced plans to launch a new strategy in the region:

To succeed, we and our friends and allies must reverse the Taliban’s gains and promote a more capable and accountable Afghan government. . . . Afghanistan has an elected government, but it is undermined by corruption and has difficulty delivering basic services to its people. The economy is undercut by a booming narcotics trade that encourages criminality and funds the insurgency. The people of Afghanistan seek the promise of a better future. Yet once again, they have seen the hope of a new day darkened by violence and uncertainty.

The Obama administration has thus both defined the problem and set clear goals for American engagement in the region. Translating these goals into achievements on the ground, however, is going to require understanding the context, the lessons from the past, and the priority actions for the future. Conditions on the ground are now much more difficult than in 2002 when the Afghan people overwhelmingly welcomed the international intervention. The goals set, however, are still achievable if the needs and aspirations of the Afghan people are the focus of renewed efforts. The administration has clearly recognized that the achievement of goals requires a medium-term approach. This report offers an implementation framework for translating the goals into feasible processes and actions in Afghanistan.

There are four major threats to securing Afghanistan’s future. First, Al Qaeda is a renewed force moving fluidly between Afghanistan and Pakistan. Second, an expanded, well resourced, and multifaceted insurgency presents a continual threat to Afghan and international actors. Third, a narcotics production, processing, and distribution network fuels corruption and violence and is becoming concentrated in the hands of a few nefarious individuals. And fourth, poor governance, underpinning all these problems, is now so entrenched that many organs of government are seen as the instruments of corruption, not of legitimacy and the rule of law.

These threats have been heightened and perpetuated by the inability of the international community to develop a unified strategy or coordination mechanism. Securing agreement on a joint strategy and on the means for coordination is a prerequisite for success in Afghanistan. The tendency of the Afghan elite to support instability rather than institutional reform is another key obstacle. The political field in Afghanistan must therefore be broadened to allow for the recognition and emergence of stakeholders in a stable and prosperous country.

While there are significant constraints to achieving the stated objectives, there are also significant Afghan and international assets to build on. On the Afghan side, the assets are in the natural, financial, and human capital and the institutional successes in areas ranging from the national army to rural development. The success of the political process from 2001 to 2004, when the first presidential elections in the country’s history were held, shows the willingness of the Afghan public to engage in democratic processes. The National Solidarity Program is one example of a novel approach that was deployed across a number of sectors. The success of its programs indicates that the key to institutional success is not context but the design of programs and the nature of partnerships between the Afghan stakeholders and the international community.

A coherent approach to state-building can produce a capable and accountable Afghan government. This report offers a prioritized approach to building state functions sequentially and in a way that creates self-sustaining linkages and reform processes. With a 10-year timeframe for achieving control of its territory and the allegiance of its people, the Afghan government can break down state functions into four institutional orders. This classification of functions will allow for a method of benchmarking and measurement and allow domestic and international actors to move from endless preparation of strategies on paper to the critical task of implementation on the ground.

First-order functions include the rule of law, to ensure that the Afghan state can control its territory through the use of effective security and police services that use force within a clear space defined by strict rules. They also include public finance, to ensure that resources, both internal and external, are channeled effectively and spent accountably at every level of government using robust national accountability systems. These functions involve administrative control, to turn Afghan territory into a hierarchically national space in which the functions and levels of governance are clearly defined and coordinated while supported by capable civil servants. These will include human capital development, to create stakeholders in positive reform that have the skills to support an effective public sector, a legitimate and productive private sector, and a vibrant civil society.

Second-order functions include market-building, creating sustainable jobs that can draw in unemployed youth who provide the basis for the insurgency and the narcotics industry. This will involve developing key initiatives in support of agriculture, through a bold initiative that works from market access backward through value chains, supply chains, knowledge, and infrastructure and uses trade concessions and innovative financial tools to ensure sustainable and profitable production. It involves mining, through transparent licensing frameworks and credible arbitration and judicial enforcement of contracts. And it includes construction, which, through a central construction code, a central procurement authority, and a construction corps, could build on the private capacity in Afghanistan to truly transform the efficiency and sustainability of infrastructure development across the country.

Third-order functions include a focus on infrastructure, to consolidate territory, harness space, and release market forces using domestic and regional capabilities to build key roads, develop alternative energies and capitalize on new technologies while focusing on social policy, through rural programs that allow for generating wealth and developing social and institutional capital from the bottom up.

Fourth-order functions include public borrowing, to ensure that external resources can be channeled effectively in support of the budget as the central instrument of policy. They demand effective management of public, cultural, environmental, and innovation assets through credible contracting and regulation and the formalization of property rights. These functions also include second-generation human capital development, through a focus on tertiary and vocational training as part of a long-term, 20- year human development plan.

These institution-building processes can be justified strategically because they build on the successful state-building efforts under way in Afghanistan between 2002 and 2005 and take advantage of the readiness of the Afghan people for good governance, the rule of law, and an end to violence and poverty.

The counter-insurgency (COIN) approach that is now beginning to guide American military actions in Afghanistan, as it has been in Iraq, also emphasizes a coherent and coordinated approach to good government to win public trust—to use force only when necessary in the short term and to avoid its use in the longer term. This is in line with the broader international thinking on state-building, which now emphasizes the centrality of governance and the cost of failure of disparate and piecemeal development approaches.

The coming months are central to Afghanistan’s future for a variety of reasons. The new U.S. strategy can reach the medium-term state-building priorities outlined above through short-term actions:

The situation in Afghanistan is difficult, but by no means impossible, and renewed international focus combined with shifting internal dynamics provide a real opportunity to change the trajectory of the country and the lives of millions of Afghans. The first step has been taken—a coherent U.S. regional strategy now exists. This must be translated into measurable medium-term goals that support a functional and accountable state. These goals must be underpinned by short-term feasible actions that can generate positive change and a sense of hope, both within and outside Afghanistan, that the future will be more prosperous and secure than the past. This is essential for Afghan, regional, and global stability.