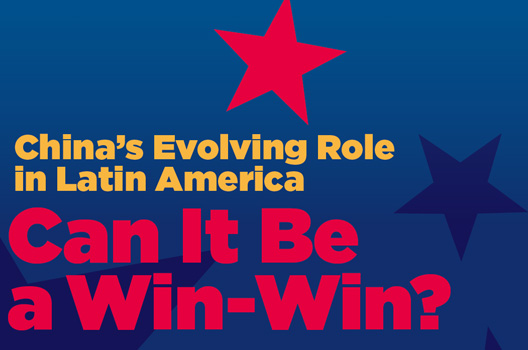 Weeks before Chinese President Xi Jinping meets with President Barack Obama in Washington, the Atlantic Council’s Latin America Center launched a new report that unravels the complexities of the Latin America-China relationship. Titled China’s Evolving Role in Latin America: Can it Be a Win-Win?, the report provides five recommendations to help both China and Latin America usher in a mutually beneficial post-commodity-boom relationship. The key to long-term success will be to insure that the relationship promotes—rather than delays—economic growth and social progress in the hemisphere.

In the report, renowned Mexico-based China Expert Enrique Dussel Peters, an Atlantic Coucil author and Professor at the Graduate School of Economics at the National Autonomous University of Mexico (UNAM), calls for a ratcheting up of strategic planning and multilateral support so the relation¬ship is a win-win for all parties, including the United States. A deep dive of the state of play is provided for five countries: Argentina, Brazil, Cuba, Mexico, and Venezuela. These countries illustrate the spectrum of ties with China, ranging from those with long and complex historical relation¬ships to those almost entirely structured around recent opportuni¬ties for economic cooperation.