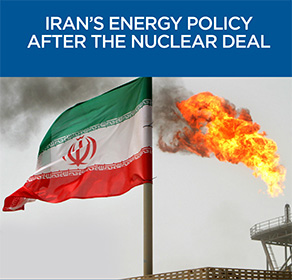 Following the lifting of sanctions on Iran’s all-important gas and oil sector, Tehran will seek to develop an “economy of resistance” by building out commercial relationships that increase other states’ reliance on it, Atlantic Council Senior Fellow Dr. Sara Vakhshouri argues in Iran’s Energy Policy After the Nuclear Deal.

Using a wealth of data and her eight years of work in the Iranian energy industry, Vakshouri explains that a cornerstone of this policy will be to rebuild Iran’s decrepit upstream sector by attracting foreign investment. According to Vakhshouri, doing so will not only boost market share, but may “have a political advantage for the Iranian side, as international partners would have shared profits and interests in Iran for longer periods of time.” Iran will also pursue plans to tie itself economically to its neighbors, in part by converting its bountiful gas holdings into electricity for export to states such as Iraq and also exporting natural gas to some of its GCC neighbors like Oman, UAE and Saudi Arabia. As Iran re-enters the global energy market, businessmen and diplomats alike can expect Tehran to reject the simple path of the petro-state and set its sights on becoming an economically diversified linchpin of the global economy.