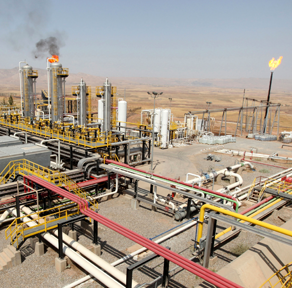 As the war against ISIS renders borders increasingly malleable and further strains relations between Erbil and Baghdad, the likelihood of a declaration of independence from the Kurdistan region of Iraq increases. In this report, Iraqi Kurdistan oil and gas outlook, Global Energy Center Senior Fellow John Roberts explores the options for the Kurdistan Regional Government (KRG) to capitalized on its oil and natural gas reserves as well as the options that would be available to an independent Kurdistan.

Roberts takes a holistic approach to examining the prospects for exporting Kurdish oil and natural gas. The report offers analysis on the current state of Kurdish oil and gas: KRG relations with Baghdad, Ankara, and Tehran, the fight against ISIS, and current production capabilities. Additionally, Roberts envisions the challenges facing the Kurdish energy sector in the event of an independent Kurdish state. By offering a side-by-side review of the challenges and capabilities facing the KRG in reestablishing profitable production and export of its natural resource reserves, Roberts is able to make constructive recommendations as to how Iraqi Kurdistan should navigate the current turmoil in the region vis-à-vis its natural resources.

Chief among these recommendations is the imperative that the KRG diversify its economy. As an independent Kurdistan or one still loosely affiliated with Baghdad, the ongoing production disruption, as well as the deficit incurred due to years of ongoing conflict amidst low oil prices, makes even a return to full export capacity insufficient to meet the demand of the Kurdistan economy. The Kurdistan Regional Government “is short on money to pay both the energy companies producing the oil on which the government relies for revenues and its own employees…and to cope with the influx of some 1.5 million refugees.” An independent Kurdistan would run the risk of being the world’s youngest rentier state, and an insolvent one at that.

This report offers timely analysis on an important hydrocarbon market and Roberts’ geopolitical analysis of regional relations in respect to the Kurdish government is vital as the Kurds emerge as an ever more defining force in the Middle East.