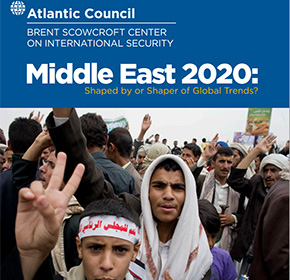 At the onset of the Arab Spring, then-Secretary of State Hillary Clinton warned that the foundations of the Middle East risked “sinking into the sand” of unrest and extremism. Three years later, the region is still in a period of prolonged tumult and uncertainty. A large youth bulge, poor economic prospects, and uneven development across the region presents significant challenges to a more stable Middle East, but, more positively, the next five to ten years could see a reintroduction of Iran to the international community and a new regional dynamic if the ongoing P5+1 talks reach a lasting nuclear agreement. What is certain is that the future of the Middle East will have profound effects globally and will continue to substantially influence the global political, economic, and security environment.

In his latest report, Middle East 2020: Shaped By or Shaper of Global Trends,Mathew Burrows, director of the Strategic Foresight Initiative in the Brent Scowcroft Center on International Security, addresses the possible medium- and long-term consequences of the ongoing developments in the region and the various factors driving the monumental changes. The report explores three alternative futures: one optimistic, in which relations among powerbrokers in the region turn a corner for the better, and two more pessimistic scenarios—fragmentation and decreasing state authority or the emergence of a new authoritarianism.

In the spirit of the adage that “those who don’t know history are destined to repeat it,” History’s Lessons for Resolving Today’s Middle East Conflicts, by Mathew J. Burrows, examines past precedents for resolving highly complex conflicts, by delving into seven historic examples of peacemaking.

Global risks 2035: the search for a new normal

What will the world be like in 2035? The forecast seems dire. In the four years since Global Trends 2030 was published, the biggest change in the world is the increased risk of major conflict.

The final report of Middle East Strategy Task Force Co-Chairs Madeleine K. Albright and Stephen J. Hadley proposes nothing short of a paradigm shift in how the international community and the Middle East interact. Not only does the report suggest ways forward for the region’s most immediate crises in Syria, Iraq, Yemen, and Libya. It […]