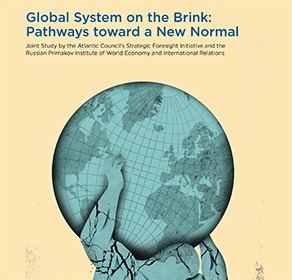 Global System on the Brink: Pathways toward a New Normal is a joint study by the Atlantic Council’s Strategic Foresight Initiative and the Primakov Institute of World Economy and International Relations (IMEMO). Work on this joint assessment of global trends began before the onset of the recent crisis in US-Russian relations, but is more relevant than ever today as we seek to avoid a greater conflict and achieve a new normal of cooperation between Russia and the West. In keeping with previous forecasting works published by the Atlantic Council and the IMEMO, the study examines current trends and potential scenarios for global developments over the next twenty years.

Despite the rapid globalization of the past few decades, which promised cooperation and integration, the potential for major state conflict is on the rise due to deep fragmentation within and between societies. The old confrontation between capitalism and communism has given way to conflicts of moral values with nationalist, religious, and historical-psychological overtones. The worst outcome would be the emergence of a new bipolarity, pitting a group of states centered around China and Russia against the United States and some European and Asian allies. However serious the current situation, the study emphasizes the opportunities for narrowing differences.