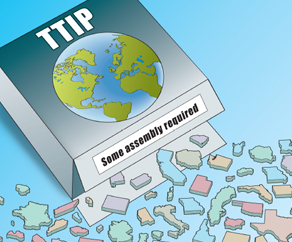 As leaders in the United States and Europe prepare for the formal launch of Transatlantic Trade and Investment Partnership (TTIP) talks, the Bertelsmann Foundation and the Atlantic Council have conducted a survey of trade policy experts from the public and private sectors on both sides of the Atlantic to gauge their expectations for the results of negotiations. This policy brief examines the results of this survey and analyzes its policy implications in three possible scenarios.

The United States and Europe have discussed a transatlantic free trade area in various guises for decades. But as negotiations for a new Transatlantic Trade and Investment Partnership (TTIP) begin, this time seems different. Both sides recognize the need to stimulate their stagnant economies in the aftermath of the financial and Eurozone crises. In an age of austerity, as debt and deficit problems have led to a major loss of market confidence in the United States and Europe’s ability to recover in a sustainable manner, a deepened trade relationship marks a path forward without adding to national debt levels. Furthermore, the rise of the emerging markets—particularly China—which often subscribe to a different economic model focused on state-owned enterprises and government directed investment decisions, marks a historic decision-point for the transatlantic community.
As this survey suggests, stakeholders have expressed deep optimism for the success of this endeavor. Still, expectations management will be key. While the data is by no means a comprehensive overview of all the potential issues that negotiators will encounter in coming months, it does indicate there are degrees of variability between issues that might help negotiators unlock them over time.

Standing at the precipice of negotiations, trade experts have indicated a strong backing for the initiative based on this data. The challenge will be to mobilize this sentiment into action.

The survey incorporates the views of approximately 120 trade-policy experts and others familiar with issues relevant to the TTIP negotiations from the public and private sectors, academia, and the media. Respondents hailed from the United States and Europe, with significant representation from those based in Washington, Brussels, and Germany. The survey was conducted between March 7 and April 1, 2013.

The report was written by Garrett Workman, associate director of the Atlantic Council’s Global Business and Economics Program and Tyson Barker, director of transatlantic relations for the Bertelsmann Foundation.