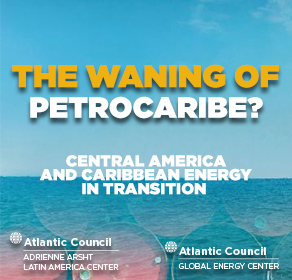 Petrocaribe, Caracas’ eleven-year-old energy and diplomatic alliance, is weakening. As Venezuela spirals closer to economic demise, the United States and the international community have an unprecedented opportunity to support Central America and the Caribbean’s transition away from Petrocaribe. A report released today by the Atlantic Council’s Adrienne Arsht Latin America Center proposes new strategies for the United States, Central America, and the Caribbean to advance together toward a more sustainable energy future. As regional leaders prepare to meet in Washington, DC on May 4 to discuss energy security, now is the time to take immediate steps to prepare against the inevitable destabilization that will result from Venezuela’s collapse.

The waning days of Petrocaribe? Central America and Caribbean energy in transition calls for greater attention to potential energy instability just off the shore and south of the border of the United States. It presents concrete policy proposals that the United States and international partners could implement to empower countries to accelerate the diversification of energy sources. Petrocaribe has receded in relevance during the low oil price cycle, but global market fluctuations demand that member-states double down on their energy transitions.

Atlantic Council Energy Advisory Group Chair David L. Goldwyn and Atlantic Council author Cory R. Gill outline eight recommendations for the May 4 summit and beyond. The report offers a compelling update of the energy landscape in Central America and the Caribbean, following on their first Atlantic Council report on Petrocaribe, Uncertain energy: The Caribbean’s gamble with Venezuela (July 2014).

“Petrocaribe faces a dim future,” said Peter Schechter, director of the Adrienne Arsht Latin America Center, “With Venezuela spiraling out of control, Petrocaribe member-states know the program is on its last legs. The United States and international financial institutions must help the Caribbean and Central America through this transition.”

The report makes recommendations for stakeholders at the May 4 summit, including the United States, Caribbean, and Central American countries in attendance, and international financial institutions:

• The United States should abandon its remaining ideological agnosticism on the region’s use of natural gas for power generation in addition to renewables.
• International partners should enhance credit support for Caribbean nations.
• The US Department of Energy should pilot smart grid and smart city technologies in the Caribbean.
• OPIC should increase the availability of its loans, guarantees, and other credit enhancements to provide support for gas import infrastructure on smaller islands.
• Caribbean and Central American leaders should follow the example set forth in Mexico’s midstream and downstream energy reforms and fully open their energy sectors to private investment.

“Vice President Biden’s efforts to prioritize this issue are laudable,” said Jason Marczak, director of the Latin America Economic Growth Initiative at the Adrienne Arsht Latin America Center. “But as the administration approaches its final months, the United States must continue to engage Central America and the Caribbean on energy security and tackle a likely post-Petrocaribe future head-on.”