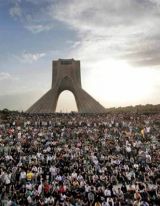 The Atlantic Council’s Iran Task Force has launched a new report, Time to Move from Tactics to Strategy on Iran, reflecting more than two years of research on a wide range of issues related to this pivotal country. The Task Force, led by Ambassador Stuart Eizenstat, recommends a long-term strategy that offers the Iranian government a face-saving exit from the nuclear crisis and seeks to lay the groundwork for better relations with the Iranian people. The report was launched at an event on April 4.

It calls for retooling sanctions to alleviate their impact on ordinary Iranians and to facilitate humanitarian trade and academic and cultural exchanges, as well as stationing American diplomats at an Interests Section in Tehran. The report, while retaining a military option against Iran as a last resort, also suggests a pragmatic solution to the nuclear crisis that ends with graduated relief of sanctions on oil and the Iranian Central Bank in return for verifiable curbs on Iran’s nuclear program.

In the end, however, real progress can only be achieved if the Iranian government is willing to live up to its international obligations and move away from nuclear weapons ambitions.

Specific recommendations in the report include: