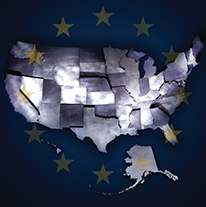 A groundbreaking new report from the Atlantic Council, the Bertelsmann Foundation, and the British Embassy in Washington, entitled TTIP and the Fifty States: Jobs and Growth from Coast to Coast, explores the impact of the Transatlantic Trade and Investment Partnership (TTIP) on the economies of all fifty United States.

In summer 2013, representatives of the United States and European Union opened negotiations to establish this new trade partnership, which would deepen the relationship between the world’s two leading economies and create the world’s largest free trade area.

If successful, this effort is expected to significantly strengthen the European and American economies by aligning the two regions’ regulatory regimes, without compromising environmental or product safety standards. This will dramatically increase transatlantic trade and investment flows and support hundreds of thousands of related jobs—creating as many as 750,000 new jobs in the United States alone.

TTIP also figures to be a key driver of wealth creation across the transatlantic economy for years to come. By lowering the costs of trade and driving job growth in a range of industries, American households (defined as a family of four) stand to gain approximately $865 annually while their European counterparts gain $720.

Many Americans, and in particular many legislators, may not realize the degree to which their states are already linked with Europe. As the statistics show, however, each state already exports large quantities of goods and services to the EU, and millions of Americans are already employed in positions directly linked to trade and investment with Europe.