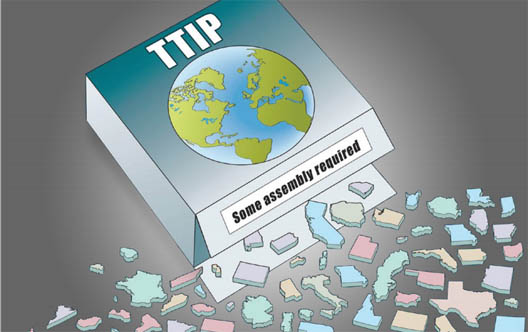 Stakeholders remain optimistic that a Transatlantic Trade and Investment Partnership (TTIP) deal can be reached, but they believe a less comprehensive agreement will result from more protracted talks, according to an Atlantic Council-Bertelsmann Foundation survey released today on the eve of the US-EU summit. The survey, a follow-up to a similar 2013 poll, gauges the attitudes of more than 300 individuals on both sides of the Atlantic nearly one year after formal TTIP negotiations began. TTIP will be on the agenda at the March 26 Brussels summit.

Despite transatlantic controversies such as the NSA scandal, 85 percent of stakeholders believe the US and EU will reach an agreement, compared to 88 percent one year ago. Such support, however, comes with caveats. Only 29 percent of respondents believe a broad, comprehensive agreement will be reached, while 57 percent expect a “moderate” accord, which would omit some of the most contentious issues. Last year, 37 percent predicted a broad agreement and 55 percent a moderate one.

A quick deal is now also seen as less likely. A plurality of 29 percent believe an agreement will take effect in 2016. Last year, 28 percent foresaw negotiations wrapping up in 2015.

The survey solicited opinions on nineteen policy areas that may be included in an agreement. Respondents were asked to rate each area in terms of its importance in a final accord and the degree of difficulty for finding common ground. The elimination or significant reduction of tariffs across most sectors was deemed the most important issue for a TTIP, followed closely by convergence on three issues: regulatory regimes and standards for manufactured goods, regulatory processes for most sectors, and crossborder information flows and digital trade.

The survey, conducted via e-mail by the Atlantic Council and the Bertelsmann Foundation from February 25-March 7, 2014, included trade-policy experts and observers of transatlantic relations in government, business, academia, and the media.