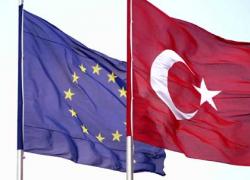 In December 2004, the European Union will decide whether or not to begin accession negotiations with Turkey. Whatever the outcome, the implications for U.S.-Turkish relations and U.S.-EU relations — indeed, for transatlantic relations generally — will be significant. The challenges for U.S. policy both before and after the EU decision are correspondingly important.

To explore the likely course of Turkish-EU-U.S. relations, and how best U.S. foreign policy might play a constructive role, the Atlantic Council sent a delegation of U.S. leaders and experts to Europe in March 2004. The delegation met with key government and private sector policy makers in Brussels, Berlin, Ankara, Istanbul and Athens for discussions about prospects for the December 2004 decision and its aftermath. This report contains the group’s conclusions and recommendations for keeping both transatlantic and U.S.-Turkish relations on a constructive course. The report reflects the consensus of the views of the delegation members, although not every member of the delegation would necessarily subscribe to every judgment in the report. The views expressed herein do not necessarily reflect those of the Atlantic Council.

In December 2004, the European Union will decide whether to begin negotiations ultimately leading to Turkey’s membership. This will be a crucial decision not only for the European Union and Turkey, but also for the United States and transatlantic relations. For strategic reasons, the United States has long been a strong advocate of Turkish accession to the EU, in the belief that membership is in the long-term interests of all the parties. But if the decision in December is to be positive, the EU must first determine that Turkey has met the “Copenhagen criteria,” and the EU must also reconcile its concerns about Turkey’s impact on European social integration, and governance. The United States can contribute to a positive decision by pursuing an active but differentiated approach. In particular:

Once past the December decision, the United States is likely to find that the path to Turkish accession to the European Union will present a number of challenges. The U.S.-Turkey relationship will change, and not necessarily for the better. As Turkey must prove its willingness to adhere to common European positions, the United States may well find Turkey on the other side of the transatlantic fence on some key issues. Differences are most likely to emerge over the Israeli-Palestinian conflict, the International Criminal Court, and perhaps over Iran and the need for reform in the broader Middle Eastern region. Turkey’s candidacy and eventual membership may give the EU more weight in NATO decision-making and NATO-EU relations, requiring the United States to change the way it manages issues within NATO. But membership may also enhance the military capabilities of the European allies, bolstered by Turkish armed forces.

These changes will not always be easy for the United States, Europe, or Turkey to manage. At times, it will be important to recall that the alternative to Turkish accession would be a Turkey less anchored in the West and more susceptible to domestic and regional pressures that could lead to instability — an outcome that would benefit no one. To ensure that Turkish accession is beneficial for the larger transatlantic relationship, the United States, Europe Union, and Turkey should: