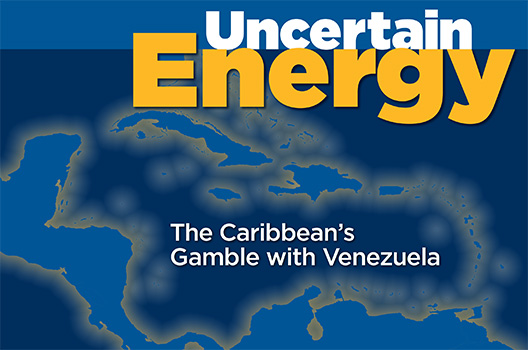 July 16 – The Obama administration must quickly adopt a range of transformative policies to avoid an energy crisis in the Caribbean and Central America, given the possibility that Venezuela’s financial support for energy imports to the region could erode quickly, according to the Atlantic Council’s Adrienne Arsht Latin America Center’s new report titled Uncertain Energy: The Caribbean’s Gamble with Venezuela. While a long-term plan toward renewables is a laudable goal, the first step is to embrace a conversion of the region’s dependence on costly high-carbon fuels to natural gas, allowing the Caribbean region to alleviate its dependence on Venezuelan crude oil and petroleum products. The United States should consider declaring the export of natural gas and crude oil to the Caribbean in the national interest to accelerate commercial attention to the region.

The Council’s nonresident senior energy fellow David L. Goldwyn and his associate, Cory R. Gill, authored this comprehensive analysis of Venezuela’s Petrocaribe program, which argues that a perfect storm of Venezuela’s slowing oil production, the Caribbean’s rising debt to Caracas, and the structural straightjacket of high electricity costs could result in serious political and economic consequences for the Caribbean region. The Petrocaribe program delivers crude oil to most Caribbean states in exchange for preferential credit terms, which frees up money for spending or investment, but also results in substantial debt for the receiving nations. Venezuela has successfully leveraged Petrocaribe to exert political influence throughout the region for the past nine years.

“Petrocaribe is slowly drying out,” said Peter Schechter, director of the Adrienne Arsht Latin America Center. “Anybody who has traveled to any of the receiving countries in the past year has heard the concerns about the future of Petrocaribe from government and business. Everybody is seeing a consistent decline in Venezuela’s oil production. Every day, these nations receive stricter credit terms, and this has serious implications for the region,” he said. “This is a policy opportunity for the United States to step up and be a helpful partner,” said Schechter.

“Vice President Biden’s announcement of a new Caribbean energy initiative in the Dominican Republic just a few weeks ago indicates that the Obama administration understands the need to secure affordable energy in the region, but the plan needs a more robust strategy,” said Jason Marczak, deputy director of the Adrienne Arsht Latin America Center. “Given the immediate risk of a Petrocaribe slowdown, our report finds that the administration should broaden its focus beyond renewables and promote natural gas to meet the region’s short- and medium-term energy needs,” he said.

“The United States has become the dominant supplier of petroleum products to the Caribbean, amid an incredible domestic shale oil boom,” said David Goldwyn. “Now is the time for the administration to help the region transition from high carbon fuels to natural gas, by creating a fiscal safety net if Venezuelan support dries up, organizing financing mechanisms for small-scale gas liquefaction and power plant conversion, and by considering accelerating this transition with declaring the export of liquefied natural gas and crude oil, to be in our national interest,” he said.

“A national interest declaration would provide a cost competitive, reliable and proximate source of alternate energy supply. These steps will facilitate private-sector efforts to market US supply to these nations, offering them a credible, viable alternative supply source, as well as a means to insure themselves against the shock of a Petrocaribe cut-off,” said Goldwyn.

“The United States and international financial institutions such as the World Bank and the Inter-American Development Bank have a responsibility to avoid a crisis,” said Schechter. Marczak agreed, “US leadership on this issue could enhance the region’s development and reduce its debt, foster cleaner energy sources, reduce its electricity costs, help US exports, mitigate the risk of an out-of-control migration event, and wean the Caribbean from Venezuela’s political influence.”