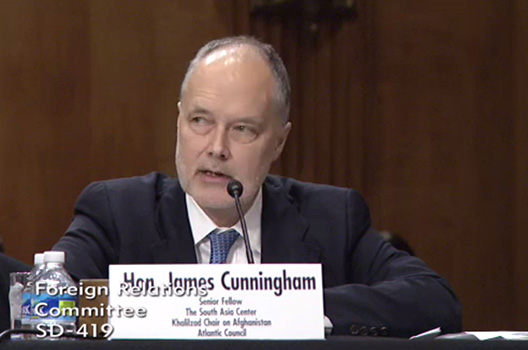 As one of the United States’ longest military engagements and NATO’s largest combat mission, Afghanistan has been the recipient of billions of dollars in military and development aid. After President Obama’s announcement in October of this year to change course in Afghanistan and retain a force of 9,800 troops on the ground through 2016, there is confidence that Afghanistan, led by the National Unity Government, will raise to the security and political challenges during the ongoing period of transition.

To realize long term success in Afghanistan, Ambassador Cunningham argued that “adequate levels of international military, financial and political support must continue”, alongside with the Afghan Government’s continuing attempt to demonstrate achievements in the security, political and economic sectors. Despite some progress, the National Unity Government still has a long way to go in these areas. However, the most challenging task ahead, Ambassador Cunningham argued, is to find ways to restart and pursue the reconciliation process with neighboring Pakistan.

Warning of Afghanistan’s vulnerability, Ambassador Cunningham reminded that groups like Daesh, who in a period of two months claimed responsibility for over 500 lives in Egypt, Turkey, Lebanon, Paris, California, Mali and elsewhere, is a new threat which must be taken seriously. He stated that the “challenge to our security in Afghanistan is one part of the long term threat” referring to groups such as Daesh, Al-Qaida, which “we have tended to dismiss…as “re-branded Taliban,” as if that made it less dangerous.”

Cunningham concluded his remarks to the Senate Committee by advising that “the United States and its partners have much serious work to do, and Afghanistan must be part of that effort.”