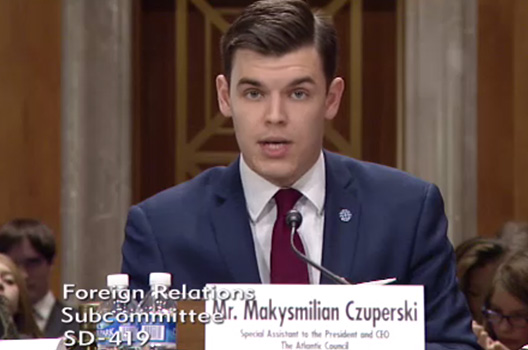 Special Assistant to the President and CEO Maksymilian Czuperski testifies before the US Senate Committee on Foreign Relations Subcommittee on Europe and Regional Security Cooperation on Putin’s invasion of Ukraine and the propaganda that threatens Europe:

Chairman Johnson, Ranking Member Shaheen, Members of the Committee, I am honored to appear before you today. As a Polish citizen, I was raised on a continent that was defined by the vision of a Europe whole, free, and at peace. A Europe in which the children of those who were once enemies became each other’s best friends, and in which freedom, democracy, and tolerance have served as unifying forces during the longest era of peace and prosperity on the European continent. A Europe in which diversity laid the foundation not for bloodshed and violence, but solidarity and progress. This Europe has become a beacon of hope—an opportunity for a better future for the thousands who risk their lives as they seek to reach its shores, or remain steadfast in the face of oppression and injustice, just to inch closer to that dream.

But today this vision—which has long been a key US strategic goal—and the continent this vision helped define are being tested by forces that seek to undermine the Europe I grew up in. No geopolitical event has made that more clear than Russia’s invasion of Ukraine last year. And, critically, it is not only Russian boots on the ground that challenge the vision of a Europe whole, free and at peace, but also a raging propaganda machine aiming to destroy the West’s confidence in its ideals and accomplishments in Europe.