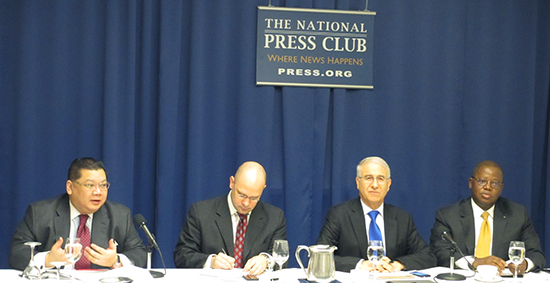 Atlantic Council Africa Director J. Peter Pham was a featured speaker at an African ambassadors’ roundtable on “Regional Solutions to Challenges in Africa” at the National Press Club today.

In his remarks, Pham noted that while demand for natural resources, demographic trends, and technology were among the factors driving the emergence of Africa as a significant global economic player in the twenty-first century, the largely untold story was how much of the political stability and economic growth was being driven by cooperation between African countries. As an example, he singled out the role that Morocco is playing in a number of West African countries with its security assistance, cultural and moderating religious influence, and significant investment in a variety of sectors, including financial institutions, telecommunications, agriculture, mining, and infrastructure.