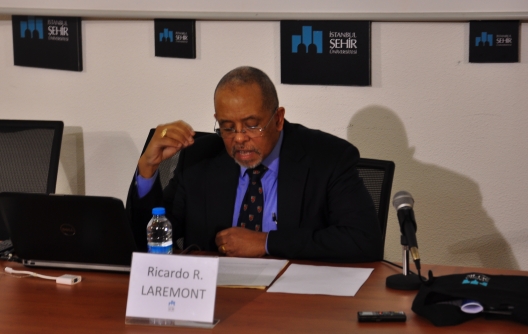 At the invitation of Istanbul Sehir University and the Republic of Turkey’s Ministry of Foreign Affairs, Ricardo René Larémont, senior fellow in the Atlantic Council’s Africa Center, gave a keynote lecture entitled “After the 2011 Arab Spring Revolts: Geopolitical and Foreign Policy Consequences with the Middle East and North Africa” at the university on January 3, 2014.

Larémont argued that the Obama administration would most likely continue its “pivot” to Asia and its partial disengagement from the Middle East and North Africa. As a result, Larémont suggested that five regional players (Qatar, Saudi Arabia, Turkey, Iran, and Israel) would emerge to fill this fragmented space, yet observed that all of these players have varying strengths and important weaknesses. Because of these realities, a geopolitical environment will emerge in which none of the competitors for influence will dominate.

Istanbul Sehir University is a private university located in Istanbul, Turkey. It was founded in 2008 by the BilimveSanatVakfı (BSV), a private foundation that is dedicated to the advancement of research and teaching in science and the arts. The university started operations during academic year 2010-11 and its Graduate School of Social Sciences (which was the site of the lecture) focuses upon the study of History, Modern Turkish Studies, Political Science, Sociology, Public Law, and Private Law.