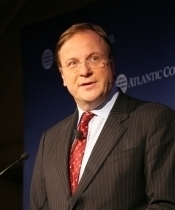 Kempe, a Utah native who graduated from the university in 1976, has led the Atlantic Council since 2006, following a twenty-five year career as correspondent, columnist and editor at The Wall Street Journal.  He previously won the Columbia Graduate School of Journalism’s top alumni achievement award.