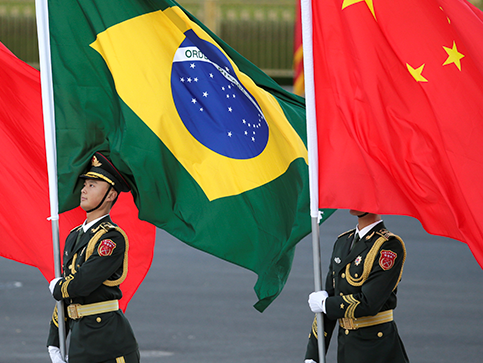 On May 12, 2020, the Atlantic Council’s Adrienne Arsht Latin America Center hosted a timely conversation on the implications of the coronavirus on Sino-Brazilian relations. The event also marked the launch of the new China-Latin America Policy and Business Consultation Group, which will discuss some of the most pressing issues around China’s relationship with countries across the region.

PDAS Chung opened the dialogue by calling for increased bilateral, regional, and global cooperation to combat the economic and public health crises. “The more we can pool our resources, the better we can overcome and fight this current situation,” she said. She also encouraged long-term capacity building and bilateral coordination efforts through capital investments, regulation coordination, and trade collaboration.

Ambassador Caramuru de Paiva noted that Brazil’s response to COVID-19 has been distributed between federal and local governments. In his view, states and municipalities have played a larger role against the pandemic, partly because of the size and diversity of the country, but also because the federal administration has followed a more lenient public health strategy. According to Ambassador Caramuru de Paiva, “the local governments took the right steps to protect people [and the] federal government was efficient in approving measures to protect businesses.”

Transitioning to external affairs, Caramuru de Paiva shared that trade with China has flourished despite the pandemic. Martins spoke on the mutual respect between the Brazilian and Chinese business communities. Both countries, he explained, have developed a “business infrastructure”—China has been Brazil’s major trading partner for at least ten years, and there is a strong bilateral business community. Caramuru de Paiva and Martins agreed that the active trade and infrastructure investment that characterize Brazil’s relationship with China are both beneficial and necessary.

Therefore, according to de Aragão, China has several concerns regarding its relations with Brazil. First, the perceptions that Brazilian decision-makers have about China; second, US influence in Brazil—for example, a suspicion toward Huawei and 5G investments; and third, non-trade opportunities that could pose a problem for operations due to regulations of mergers and acquisitions. Therefore, de Aragão stated, China’s short-term goals are to understand the presidential decision-making process; to increase strategic partnerships in infrastructure; and to counteract the negative portrayals of China within the Brazilian government.

When asked if there is political pressure to impose tariffs on Chinese products, de Aragão asserted that Brazilian imports from China reflect the nature of free trade and supply chains. He stated that due to its complex tax system and labor laws, Brazil has been unable to boost local production at competitive prices.

The panelists compared the Chinese and US approach to Latin America. PDAS Chung encouraged Brazil and Latin American countries to be careful of China’s intentions, given their lack of transparency, predatory lending tactics, and strict government control over the Chinese business sector. Caramuru de Paiva responded that Brazil is not facing a dilemma between China and the United States, even if both powers have different economic models. “We have to have a decent dialogue with both,” he stated.

Chung explained that Brazil does not face “a choice between the United States and China,” but a choice about what Brazilians want and what values they want to import and integrate into their nation. Caramuru de Paiva mentioned that many Brazilians favor democracy, multilateralism, free trade, and international health cooperation; however, he expressed confusion over the values that are leading current US foreign policy.

To close the conversation, Martins observed that “Brazil doesn’t have the luxury to choose investors,” and noted that “any restriction to investors, whatever country, would be unconstitutional and unsustainable.” He lauded Brazil’s recent regulatory efforts and acknowledged that Brazil should continue to build upon this platform.

Observing that Brazil received more foreign direct investment in the first four months of 2020 than in the entirety of 2019, Martins shared that Brazil has a privatization plan to open the market further after the pandemic. He looked toward the future with optimism, declaring, that despite challenges, Brazil has institutions that will continue to attract foreign investments. “I would love to see investors from everywhere, to challenge, participate, and contribute in [the Brazilian] market,” Martins concluded.