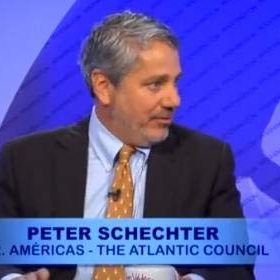 WASHINGTON – The Atlantic Council today named Peter Schechter as the director of its newly launched Adrienne Arsht Latin America Center, where he will lead the center’s work forging new political, economic, and business ties between Latin America, North America, and Europe. The Center will highlight Latin America as Europe and North America’s strategic and economic partner by engaging on issues which include: trade and investment, natural resources and energy, strengthening civil society, the role of urbanization and cities, and developing human capital and entrepreneurship.

Fluent in six languages, Schechter is an international political and strategic communications advisor with a specialty in Latin America who has counseled heads of state and business leaders around the globe. For the past twenty years, he has served as the lead consultant on a host of high-stakes elections—overseeing polling, campaign management, advertising, and media relations—in nearly every country in Latin America, including Mexico, Brazil, Colombia, and Argentina. Schechter has also been a senior communications advisor to Latin American companies such as Techint, Polar, Visa Latin America, Grupo Santo Domingo and Peru LNG.

He is a visiting professor at Ben Gurion University’s Faculty of Business and Management in Israel and as an adjunct professor at The George Washington University. Schechter founded the DC-based communications consulting firm Chlopak, Leonard, Schechter and Associates; served as deputy staff director for the US House Subcommittee on International Development Institutions and Finance; and worked at National Public Radio and the Inter-American Development Bank. Read his full bio.

“Through the launch of Arsht Latin America Center, the Atlantic Council recognizes the region’s growing economic and political dynamism and its natural place in a transatlantic community of shared values and history,” said Frederick Kempe, Atlantic Council president and CEO. “Peter Schechter’s entrepreneurial spirit, his creative mind, and intimate knowledge of the intersection of Latin America’s political and business circles make him the perfect leader for this initiative.”

The European Union is the largest foreign investor in Latin America, and the region is the fastest-growing trade partner of the United States. As Latin America’s political influence and economic dynamism grow, the Atlantic Council chose this historic opportunity to advocate for accelerating the region’s incorporation as an equal partner into the largest economic relationship and community of shared values in the world. The Arsht Center was founded through a $5 million gift from leading philanthropist and businesswoman Adrienne Arsht, who recognized a need to integrate the interests of Latin America with those of Europe and the United States to shape the global future while also creating a network of influence united around fundamental democratic principles.

“In Peter, we have found an exceptional individual who is passionate about the importance of Latin America place in the transatlantic world,” said Arsht. “Under Peter’s leadership, the Adrienne Arsht Latin America Center will highlight the significance of Latin America within the existing ties between Europe and the United States.”

The Arsht Center is the tenth Atlantic Council program, which will work in conjunction with the Council’s other regional centers and functional programs to advance the organization’s mission of renewing the transatlantic community for today’s global challenges.

To arrange an interview with Peter Schechter, or for more information about the Arsht Center, please contact us at [email protected].