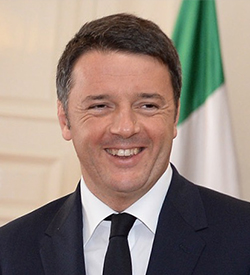 He was born in Florence in January 1975 and grew up in Rignano sull’Arno. During his university years he became interested in politics, campaigning in support of Romano Prodi, later to become Italy’s prime minister and president of the European Commission. In 1999 graduated from Florence University with a JD and married his wife Agnese Landini, who is now a teacher.

In 2004 he was elected president of the Province of Florence. During his tenure, he cut taxes and increased investment in culture and education. In 2008 he decided against running for a second term for president of the Province of Florence and instead announced his candidacy for mayor of Florence. After a successful campaign, he became mayor of Florence in June 2009. While serving as mayor he worked to make the city more pedestrian-friendly, appointed an equal number of male and female city councilors, and increased investment in schools and social and cultural activities.

From 2010 to 2012 his involvement in national politics increased. On September 13, 2012 Renzi announced his candidacy to lead the center-left coalition in the 2013 general election, but lost the December 2 runoff to Pier Luigi Bersani. In 2013 he announced that he would run for the position of secretary of the Democratic Party, and on December 8 he emerged victorious with 67.5 percent of the vote.

Following Prime Minister Enrico Letta’s resignation, Renzi became prime minister of Italy on February 22, 2014. He is the youngest to hold the office since the Unification of Italy in 1861.