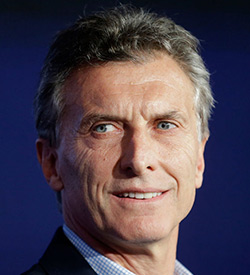 His Excellency
Mauricio Macri
President of the Argentine Republic

An engineer by training, Mauricio Macri has been president of the Republic of Argentina since December 2015, following a career in business, sports administration, and as mayor of the city of Buenos Aires.
During his presidential campaign, Macri earned the support of citizens and political parties across the ideological spectrum based on his ‘Let’s Change’ coalition that looked for alternatives to the isolationist and populist policies of the past and sought to strengthen democratic institutions.
Prior to being elected president, Macri served as mayor of Buenos Aires City (2007-2011; 2011-2015). As mayor, he pursued regeneration programs in the city’s more vulnerable neighborhoods, made public services more efficient and transparent, and improved the city’s financial management.
He was also responsible for pushing through public transport and environmental initiatives to improve sustainable mobility in the city. He created the first bus rapid-transit system in the country, reducing carbon emissions and traffic in Buenos Aires and its surrounding suburbs.
In the two years prior to becoming mayor, Macri served as national deputy for the City of Buenos Aires (2005-2007).
Before embarking on his political career, Macri was president of Club Atlético Boca Juniors (CABJ), the most popular soccer club in the country.
Macri has a degree in civil engineering from the Catholic University of Argentina (UCA), after which he worked in the automobile and construction sectors as an engineer, business analyst, and executive.
In 1991, he was kidnapped and held for ransom for twelve days, an episode that led him to focus his career on public service, to reduce poverty, violence, and corruption.
Macri is married to businesswoman Juliana Awada and has four children. He was born in 1959 in Tandil, Argentina