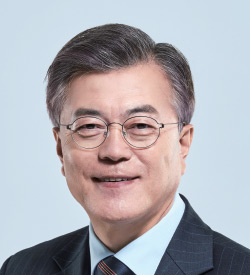 Moon Jae-in became the president of the Republic of Korea on May 10, 2017. He was born as a son of a refugee on the southern coast of South Korea in 1953. His parents fled North Korea during the Korean War. Although he was born into an impoverished family and was a shy boy, he was accepted to a prestigious local middle school where he first experienced social inequality. As a young student, he became aware of social issues while reading books and magazines on current affairs at the library.

During his university years, he was arrested for participating in a protest against then-President Park Chung-hee’s dictatorial regime and was forcibly conscripted into the Special Forces. After finishing his military service, he passed the bar exam. President Moon started his career as a lawyer in Busan, his hometown. There, he began actively defending political dissidents, student activists, and labor rights advocates who were embroiled in legal cases.

When Roh Moo-hyun, a human rights lawyer who partnered with Moon together in a law firm, entered politics, Moon Jae-in helped him win the presidential election in 2002 and joined him at Cheong Wa Dae, the presidential office. During the Roh Moo-hyun administration, Moon served as chief of staff. In 2009, the retired President Roh passed away as a result of politically motivated oppression. Moon oversaw the overall procedures of the funeral. Afterwards, public support led Moon to enter politics, and he was elected to the National Assembly in 2012. He was the runner-up in the eighteenth presidential election that same year. In 2015, he became the leader of the Democratic Party of Korea, in which he played a key role in reforming the party and helping it win the twentieth general election in 2016.

In October 2016, candlelight protests calling for the resignation of President Park Geun-hye spread all around the country due to alleged corruption and an influence-peddling scandal. Moon was with the people who took part in the candlelight protests and became the focus of the hope for changes in the Republic of Korea. On May 9, Moon was elected as president following the impeachment of President Park.

President Moon is the author of multiple books, including Moon Jae-in’s Destiny (2011), People Come First (2012), and most recently among many others From Destiny to Hope (2017).

President Moon is married to First Lady Kim Jung-Sook with a son, a daughter, and two grandsons.