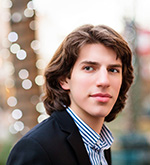 Seventeen-year-old Llewellyn Sanchez-Werner is an American pianist and composer who uses his music not only to connect with audiences on an emotional level, but also as a diplomatic tool to bridge cultural divides. He was recently named a Gilmore Young Artist, an honor highlighting the most promising American pianists of the new generation. He made Juilliard history at age fourteen as the youngest-ever admittee to the College Division. In 2009, Sanchez-Werner performed solo at the White House for President Barack Obama; and in 2013, for the presidential inauguration concert at the Kennedy Center.

In 2010, he was the first American soloist to perform in Iraq with the Iraqi National Symphony Orchestra for an international audience of diplomats, US soldiers, and Iraqis of all ages. The concert raised funds to support the Children’s Cancer Hospital and celebrated World Day for Cultural Diversity. In Rwanda, Sanchez-Werner performed for President Paul Kagame and for humanitarian and economic leaders, hosted by US Ambassador W. Stuart Symington, to help Rwandans continue rebuilding from the 1994 genocide. To excite more young people about classical music, he performed sixteen concerts for twenty thousand North American students. He also performed “Beethoven and the Bully” as part of an anti-bullying campaign for six thousand students.

For Hilan Warshaw’s documentary Wagner’s Jews, which explores the ongoing controversy over performing Wagner’s music in Israel, Sanchez-Werner was filmed in New York performing the works of Tausig, Wagner, and Liszt. He has also collaborated with the Gershwin family on a concert and biographical tribute to the Gershwin brothers.

As part of the Beyond the Machine series, he performed modern multimedia works in collaboration with Juilliard’s Technology Center, Dance, and Drama Divisions.

Juilliard is Sanchez-Werner’s second college experience. He became a full-time student at Ventura College at age five, where he completed 170 college credits toward degrees in music and international relations. He studies with Yoheved Kaplinsky and Ilya Itin.