Respondents were asked if they supported or opposed five possible ways to change US policy toward Cuba.

POLICY OPTION 2: Removing restrictions on US citizens to spend dollars in Cuba

A common sense majority of Americans responded that they would support normalizing relations with Cuba. This number jumps to even higher levels of support, reaching well into the 60 percent range, when asked about specific policy changes that could ultimately put the United States and Cuba on a path to normalization. This figure shows that a strong majority of the US public, including Floridians and Latinos, would like to see the removal of economic restrictions. Florida residents and Latinos tended to have slightly higher levels of support for most of these changes in keeping with their overall levels of support.

POLICY OPTION 3: Removing all restrictions on travel to Cuba by US citizens

POLICY OPTION 4: Allowing Cuba access to high-speed Internet and other telecommunications systems based in the United States

Non-Cuban US citizens are barred from traveling to Cuba without government permission, while Cuban-Americans may visit freely without a special visa. This is the only country in the world with which the United States has this policy of restricting certain US citizens and not others. Still, the Cuban authorities report that over 98,000 US citizens traveled to Cuba in 2012 (after obtaining US visas) and although not reported in Cuba’s tourism statistics, it is estimated that an additional 350,000 Cuban-Americans visited Cuba in that year. These numbers reflect a small percentage of the potential number of US tourists if all travel restrictions were lifted—a policy option that is supported by 61 percent of US adults, 67 percent of Floridians, and 66 percent of Latinos.

While the US public is in favor of allowing access to high-speed Internet and telecommunications, their enthusiasm for this policy change is not as strong as observed for other options. This could reflect a general sense of unease around data security issues.

POLICY OPTION 5: Holding meetings with the Cuban government to coordinate on issues of mutual concern, like preventing drug trafficking and smuggling 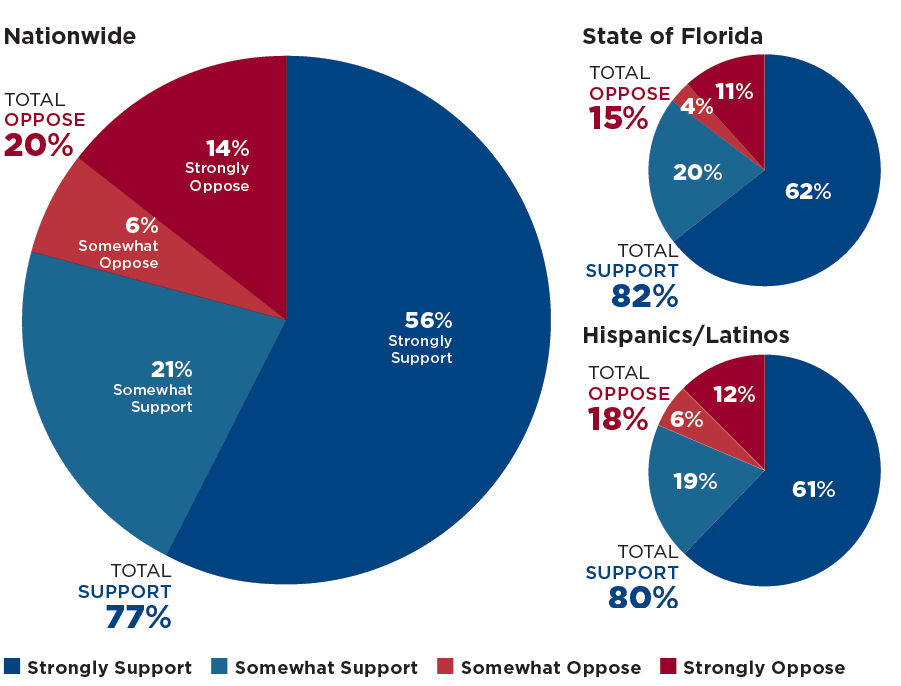 Respondents were asked if they supported coordinating with the Cuban government on issues of mutual concern, such as preventing drug trafficking and smuggling. Such high levels of support indicate people’s desire to prioritize issues of concern to the United States and to engage in the most productive way possible to protect US interests. Throughout history the United States has worked with unsavory nations to strategically manage those issues most important to this country. There is clear demand for the United States to do the same with Cuba.

Support for Cuba Remaining on the State Sponsors of Terrorism List 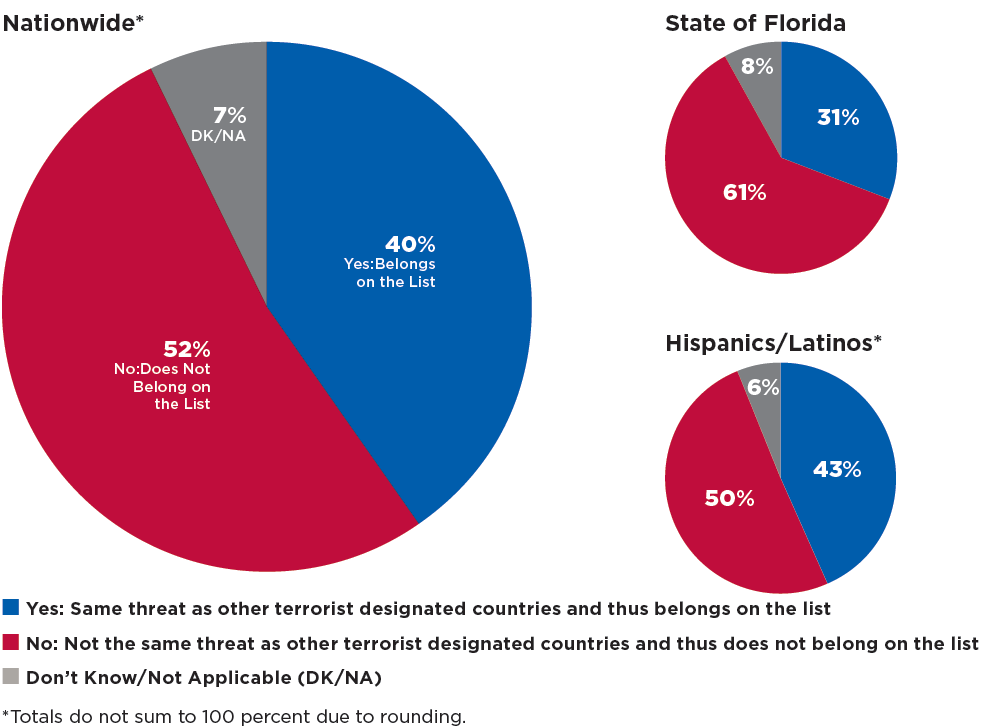 An understanding of the details of Cuba politics proves to be a governing factor in the results of this question. Respondents were told: “Currently, the US State Department designates four countries in the world as state-sponsors of terrorism: Cuba, Iran, Syria, and Sudan. The State Department defines state sponsors of terrorism as countries that have repeatedly provided support for acts of international terrorism, and places sanctions on these nations that restrict trade, travel, and foreign assistance.” Respondents were then asked to decide accordingly if Cuba deserved such a status: “In your opinion, does Cuba pose the same threat as these other countries—Sudan, Syria, and Iran—and thus belong on the list?” With a foreign policy centered around a war on terror the nation is somewhat squeamish about removing Cuba from the terror list. Those closest to the issue (Floridians) were more likely to distinguish between the threat that Cuba poses to the United States and that of the other three nations. 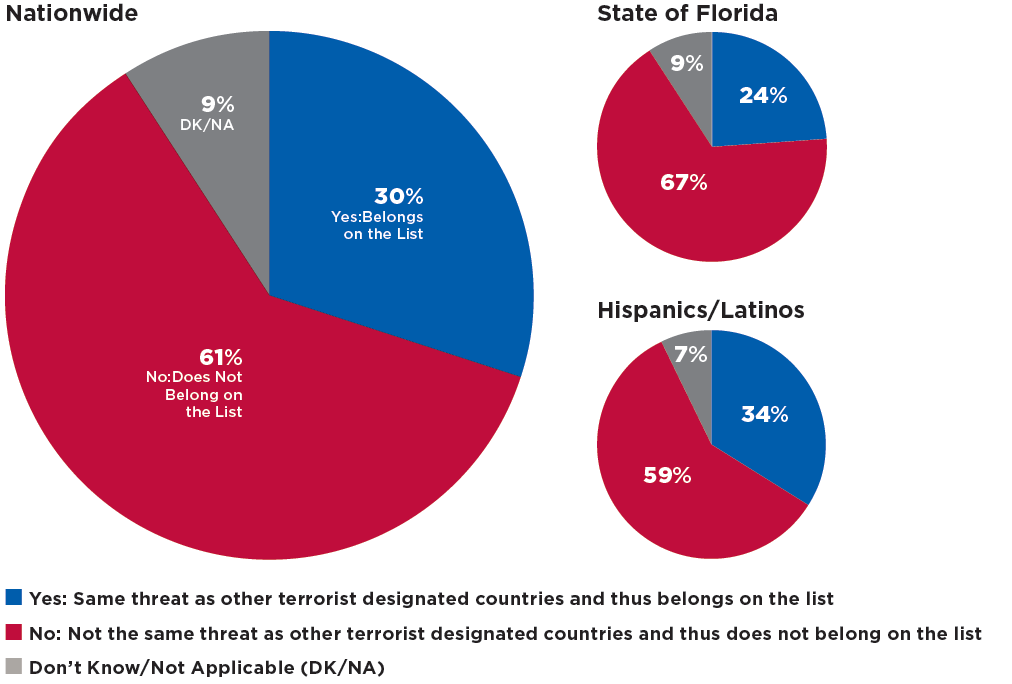 After the initial question about whether Cuba belonged on the State Sponsors of Terrorism List respondents were provided additional information: “Thousands of Al-Qaeda terrorists are in Sudan or Syria, and Iran has been aggressively building its nuclear program. Despite human rights abuses, Cuba poses none of the active dangers to the United States and our security that these other countries possess.” The same question was then asked (See previous figure) but with a dramatic shift in those who believe that Cuba does not pose the same threat as the other nations on the list. An important takeaway is the tendency to be in favor of changing policy with even more information on the topic.

Support for a Special Envoy for Cuba 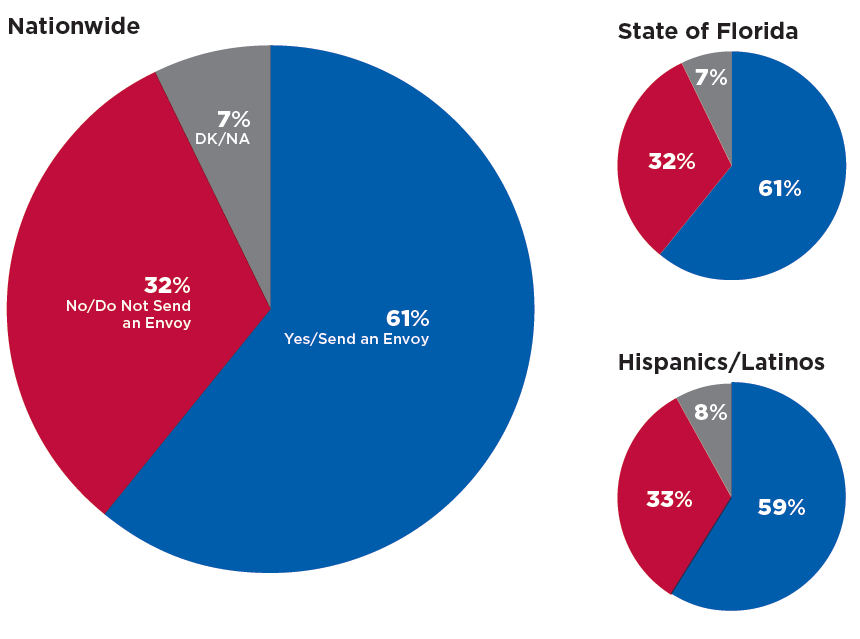 Respondents were told: “The United States often establishes a special diplomatic position, called an envoy, for countries that we have hostile or tense relationships with, like North Korea, Sudan, and the Congo.” When asked if the United States should appoint a special envoy for Cuba, 61 percent of the nation believed this is a worthwhile policy to pursue. A majority of Latinos also agreed.

The Obama administration has utilized the role of the special envoy and special representative more than any other previous administration, with twelve special envoys currently serving in the State Department. These roles exist for the purpose of being able to engage in productive relations through a high-level post in lieu of an in-country ambassador. By creating this position for Cuba the United States could avoid any tacit approval associated with an ambassador, yet still negotiate the relationship between the two countries.

Sixty Percent of the Country Supports a Special Envoy for Cuba