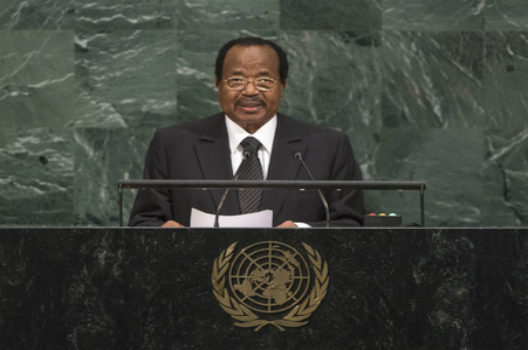 Cameroon’s crisis, which pits a marginalized group of English-speakers against the Francophone majority, has taken a dangerous turn. The conflict has its roots in the colonial era, when British and French territories were awkwardly combined to form modern-day Cameroon. Anglophones have wanted autonomy for decades, but in the past year, they have mounted a full-throated secessionist campaign. In October, Anglophone protests marred the country’s 56th anniversary of unification, triggering a violent crackdown by the state. Protestors have since begun attacking the security forces, and their demands for the creation of an independent nation, which they call “Ambazonia,” have become increasingly violent.

Since October 1, attacks by the Ambazonia Defense Forces (a secessionist militia) on the army and police have triggered brutal reprisals. While opposition politicians have called for a national dialogue and parliamentary debate on the crisis, neither side seems interested in compromise. On the contrary, their rhetoric has helped inflame the country’s long-standing tensions.

Following the deaths of ten more soldiers and policemen last week in the Southwest region, President Paul Biya labeled the secessionists “a band of terrorists” and called Cameroon a “victim” of the movement. Defense Minister Joseph Beti Assomo then called for immediate measures to “eradicate this inconvenient situation.” Later, the state radio put the government’s plans in more explicit terms, stating that “[President] Paul Biya has declared war on these terrorists who seek secession.” Meanwhile, the secessionists have been ramping up their attacks on military convoys and road checkpoints in an effort to procure more weapons, and their leaders have promised to “dismantle all of [the] military outposts that have been used to prosecute the occupation of our homeland.” They demand nothing less than independence.

This inflammatory rhetoric by both sides signals another major shift in the crisis. The use of terms like “war,” “terrorists,” and “eradicate” by government officials shows an explicit lack of Francophone willingness to hear the concerns of the country’s Anglophone minority. What is more concerning is that these have not been empty words: since President Biya ”declared war” on the secessionists at the end of November, there has been a sharp increase in the number of government checkpoints on major roadways and numerous reports of increasing military presence in the Northwest and Southwest regions. While the government denies that it is militarizing the Anglophone regions, there are serious allegations of human rights abuses by security forces, and thousands have fled from their homes.

The government clearly hopes to impose a quick military solution on the crisis, but its repressive tactics are likely to backfire, aggravating Anglophone grievances, creating a needless humanitarian crisis, and sullying the country’s international reputation. The secessionists have been equally foolhardy. Their use of violence may in the short term have gained their cause some desperately-needed attention, but they have instigated a battle that they cannot win, given the far superior strength of the state, and have lost the moral high-ground in the process. As both sides have become entrenched in their positions and will seem to lose face if they back down, a return to dialogue seems highly unlikely.

With no end in sight, how will the secessionist movement respond? Will the increased use of violence spark disagreements within the secessionist movement, splintering it along lines of support for such tactics? Will it lead to greater repression in the everyday lives of Cameroon’s Anglophone minority, including those who are peaceful? Given the lack of global support for secession movements—particularly violent ones—and international disinterest in the plight of Cameroon’s Anglophone minority, the secession movement may quickly be driven back underground. But the Biya government may have to institute a full crackdown on the Ambazonia Governing Council and its supporters to do it. This would involve moving beyond the current curfews, internet shut downs, mass arrests, and small-scale violence to systematic state-led violence against civilians. No doubt, the international community, including US policymakers and the United Nations, will condemn such developments from afar. But if international policymakers fail to act when the Cameroonian central government violently represses the movement—which is the most likely scenario—what will prevent other repressive leaders in the wider region from thinking they can do the same?

Alexandra Fairbend was an intern with the Africa Center.