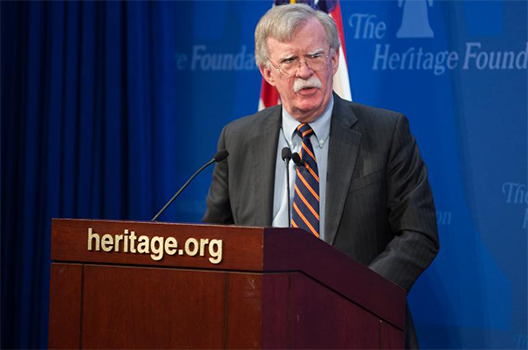 In December, when US National Security Advisor John Bolton previewed the Trump Administration’s security strategy for Africa, he focused more on the rising financial and political influence of China and Russia than on US plans to fight the “proliferation of Radical Islamic Terrorism” across Africa. This is surprising, because in Somalia, the United States has dramatically ratcheted up airstrikes against al-Shabaab and local ISIS militants. And the death of four US special operations soldiers in Niger in November 2017 brought scrutiny to the unreported activities of US special forces in Africa.

Observers note that in many respects, the Trump Administration’s security strategy for Africa looks similar to that of the Obama Administration: kinetic strikes combined with support to African militaries fighting insurgencies on the ground. But there is a marked difference in emphasis. While President Trump threatens to slash aid, Obama’s security strategy relied heavily on building partner military capacity and on providing broader packages of development aid and humanitarian relief as a means of boosting economic growth and countering radicalization. Until recently, defense chief James Mattis seemed to share that emphasis: amid persistent reports of plans to downscale military assistance to African partners, he steadily managed to increase it and to reassure allies of US commitment to multilateral efforts. But with his – and UN Ambassador Nikki Haley’s – departure, John Bolton has clearly taken possession of the field, making any insights that can be gleaned from his speech particularly important.

Bolton reaffirmed President Trump’s intention to cut foreign aid, vowing, in particular, that the United States would “no longer support unproductive, unsuccessful, and unaccountable” United Nations peacekeeping missions. He pointed out that the presence of UN Blue Helmets in Western Sahara since 1991 had “frozen” rather than resolved those conflicts – he might have added Congo or South Sudan. But perhaps more importantly, he carefully singled out an alternate model for praise: the counterterrorism alliance between Mauritania, Mali, Burkina Faso, Niger, and Chad that is known as the G5 Sahel. Significantly, he described the G5 Sahel as “a great example of the enormous potential for African joint security cooperation,” and remarked that he wished “to see more cooperative regional security organizations like these emerge around the world.”

The G5 Sahel was created by France in 2014 to help Sahelian countries to coordinate their efforts to combat the growing threat from Al Qaeda and indigenous terror groups in West Africa. The G5 countries coordinate on security and development matters, but the alliance’s main feature is the G5 Sahel Joint Force, which consists of troops from each of the nations working jointly on border control and counterterrorism.

The joint force is an “African-led, French-assisted, US-supported force,” in the words of Africom Commander, General Thomas Waldhauser. The joint force is still in the capacity-building stage but is intended to grow to 5,000 troops, and it has already conducted six operations. After enduring a severe attack on its headquarters and reshuffling its leadership last summer, it has announced that more are to come.

But the security situation in the Sahel remains dire, and it is unlikely that the coalition of Mauritania, Mali, Burkina Faso, Niger, and Chad can soon become wide enough in its scope of action and self-reliant enough in its funding. This is a big problem, because political support for the UN and French missions that currently support the G5 Sahel is diminishing. The French Operation Barkhane has been striking jihadist leaders since 2014; and though French President Emmanuel Macron reaffirmed his support for the mission as recently as last month, Operation Barkhane is increasingly hamstrung by interethnic tensions, in Mali in particular. Meanwhile, the UN mission in Mali is among the most dangerous peacekeeping operations in the world, and the UN Security Council intends to significantly “adapt” the mission – a diplomatic word for downsizing – in the absence of any progress in the implementation of the peace agreement signed in 2015 between the Malian government and armed groups.

All of this puts added pressure on the G5 Sahel to contain the Mali crisis and prevent it from spreading outwards through the region. However, in 2017, the United States blocked a Security Council resolution that would have given the G5 Sahel joint force a peacekeeping mandate under the UN Charter’s Chapter VII, authorizing the G5 Sahel to use force across borders, and – most vitally – granting it a predictable source of funding from the UN peacekeeping operations budget. In doing so, Washington claimed that a peacekeeping mandate was unneeded by the G5 Sahel, whose forces predominantly operate within their own national borders. In reality, though, the Trump Administration seemed opposed to providing the G5 Sahel with funding from the UN peacekeeping operations budget. The Chapter VII mandate would in effect have shifted much of the financial burden of supporting the G5 Sahel away from France and the European Union and onto the United States (which is automatically allocated 28 percent of the UN peacekeeping budget).

This was perhaps a reasonable objection and it is certainly consistent with the Trump Administration’s stated policy platform. But it has left the G5 Sahel without access to a recurring financing mechanism. And that could greatly undermine its capacity to fight terrorism and prevent the spread of transnational crime.

So far, G5 countries have managed to score impressive bilateral contributions, including from the United States. At a February 2018 donor’s conference in Brussels, more than fifty countries and international organizations collectively pledged half a billion dollars to support the joint force. The European Union and Saudi Arabia pledged over $120 million each, and the United States promised $60 million – then doubled the amount in November 2018.

But major donor conferences cannot be organized every month. More important, while Chapter VII funds are disbursed on a regular schedule, the promised bilateral contributions are materializing very slowly. Jean-Pierre Lacroix, the UN undersecretary for peacekeeping operations, said last November that “almost 50 percent of pledges generated have not been earmarked, let alone disbursed.” The lack of financing predictability is detrimental to the joint force’s buildup and worrying for its future operations.

During his speech last December, Bolton seemed to double down on the Trump Administration’s objection to a Chapter VII mandate, stating that “G5 countries must remain in the driver’s seat – this initiative cannot be outsourced to the UN for funding and other support.”

Bolton’s hope seems to be that the burden of fundraising will encourage the G5 Sahel to stay performance-driven and accountable towards its donors, and motivated to “resolve conflicts, not freeze them in perpetuity” – unlike many UN peacekeeping missions. And he does have a point: peacekeeping operations in Africa do often tend to be self-perpetuating, and sometimes feed the conflicts they are intended to end. As the donor, the United States – which seems willing to pay its fair share of the G5 Sahel’s bill – should in principle be entitled to choose whether to contribute those funds on a bilateral or multilateral basis.

But, principle aside, denying the G5 Sahel a peacekeeping mandate is a risky bet. Without predictable and sustainable funding, the operational capacity of the G5 Sahel Joint Force will almost certainly suffer. Instead of “taking the driver’s seat,” the G5 countries may decide that the alliance is more trouble than it’s worth. Political will to coordinate security and development efforts across borders is already weak: Mauritania and Chad are, after all, no more eager to pay for Mali’s security than are the United States and France – without the incentive of regular donor funding, they may well withdraw. If the G5 Sahel flounders, not only will the situation in Mali deteriorate – requiring the UN peacekeepers who are already there to do more, at US taxpayers’ expense – but the jihadist threat from West Africa will grow, perhaps until it poses a security threat that the United States cannot ignore. If that happens, Washington may regret that it failed to create a Sahelian-led peacekeeping mission when it had the chance.

Matthieu Fernandez was a project assistant with the Africa Center.