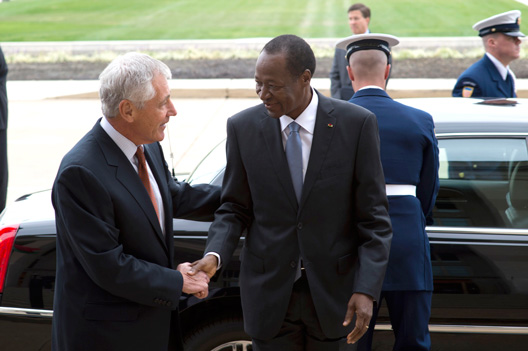 Although scores of African heads of state and government who will be arriving in Washington in coming days for the historic US-Africa Leaders Summit, media attention will likely focus on only a handful of leaders either because of the economic heft of their countries or because of the controversies surrounding them. This is regrettable since, in addition to the business deals to be struck and the challenges to be confronted, the gathering should also be an opportunity to strengthen ties with a number of countries and leaders who, away from the limelight, have quietly proven themselves to be remarkably reliable partners to the United States. One such country is Burkina Faso, whose President Blaise Compaoré will be hosted by the Atlantic Council next week.

Despite its extremely limited resources—it ranks 183 (out of 186) on the most recent edition of the United Nations Development Program’s Human Development Index—Burkina Faso has been an important ally of the United States in the struggle against terrorism in the Sahara and the Sahel. It was a charter member of the Trans-Sahara Counterterrorism Initiative (TSCTI, subsequently renamed the “Trans-Sahara Counterterrorism Program,” TSCTP, and, later, the “Trans-Sahara Counterterrorism Partnership,” likewise TSCTP), launched in 2005 with State Department funding and support from the US Defense Department’s “Operation Enduring Freedom-Trans Sahara” (OEF-TS). The program works with partner nations to provide training and support, with an emphasis on preventing terrorism, enhancing border and aviation security, promoting democratic governance, and building public support against extremism. In addition, Burkina Faso has hosted a number of PC-12 turboprop surveillance aircraft whose flights have provided critical intelligence to US military and intelligence officials on militant and criminal movements in the vast expanses of the region. Burkina Faso has also volunteered its troops for United Nations and African Union peacekeeping missions; currently some 2,000 Burkinabé personnel are serving in blue-helmeted missions in the Côte d’Ivoire, Democratic Republic of the Congo, Mali, South Sudan, and Sudan, and units are in training to deploy to the Central African Republic.

Perhaps even more significant than the security cooperation has been the diplomatic efforts which Burkina Faso’s president has undertaken which likewise have advanced stability in the region, a key US policy objective. President Compaoré has proven especially adept at facilitating internal dialogue in neighboring countries in crisis, his personal engagement helping to build the consensus needed to move towards national elections over the last decade in Togo, Niger, Guinea, and Côte d’Ivoire—all of which resulted from a “Ouagadougou Accord” named after the Burkinabé capital. Not surprisingly, after the overthrow of the elected government of Mali in 2012 and the subsequent takeover of the northern part of the country by Tuareg separatists initially allied with al-Qaeda in the Islamic Maghreb (AQIM) and other Islamist terrorists, the subregional organization, the Economic Community of West African States (ECOWAS) appointed the Burkinabé president as its official mediator; his diplomatic efforts subsequently led to the signing, in June 2013, of yet another Ouagadougou Accord, this time between the Malian government and two of the movements representing northerners, the National Movement for the Liberation of Azawad (MNLA) and the High Council for the Unity of Azawad (HCUA). The agreement paved the way for elections which resulted in the restoration of constitutional order to Mali in September 2013.

The diplomatic and security dimensions of the bilateral relationship have been complemented by the award, in 2009, of a compact through the Millennium Challenge Corporation, which provides money to select countries that have demonstrated performance on a series of independent policy indicators to fund specific major programs targeted at reducing poverty and stimulating economic growth. The more than $480 million which American taxpayers have invested have resulted so far in the irrigation of 2,240 hectares of land and the construction of almost 500 kilometers of roads—significant transformations in an arid, landlocked country slightly larger than Colorado, which makes the United States the country’s most important development partner.

While Burkina Faso has a long way to go on the first Millennium Development Goal of eradicating poverty and hunger, the progress it has made with the other goals has been noteworthy. Primary school enrollment was just shy of 93 percent last year, almost triple what it was in 2000. An ambitious building program has more than doubled the number of primary schools over the same period from 5,131 to 11,545, with the overwhelming majority of the new constructions in previously underserved rural areas.

Already cognizant that, as First Lady Michelle Obama noted earlier this week in her address to participants in the Young African Leaders Initiative’s Mandela Washington Fellowship, “no country can ever truly flourish if it stifles the potential of its women and deprives itself of the contributions of half of its citizens,” Burkina Faso has also made remarkable strides on gender equality. Over the last fifteen years, an education partnership between government and nongovernmental organizations has pushed the female genital mutilation rate down dramatically from 55 percent to less than a fraction of one percent. During roughly the same period, school attendance by girls has jumped from 36 percent to 81 percent. By law, a minimum of 30 percent of parliamentary seats and local government offices are reserved for women.

In 2009, then-Senator John Kerry hailed Burkina Faso for proving that a country with limited resources can “punch above its weight.” Events in recent years have shown that it continues to do so, providing all the more reason why Secretary of State Kerry and others in the administration would do well to cultivate the promising partnership.

Image: Secretary of Defense Chuck Hagel, left, greets Burkina Faso President Blaise Compaore upon his arrival at the Pentagon in Arlington, Va., on Sept. 23, 2013. The two leaders will meet to discuss security issues of mutual importance. DoD photo by Erin A. Kirk-Cuomo.