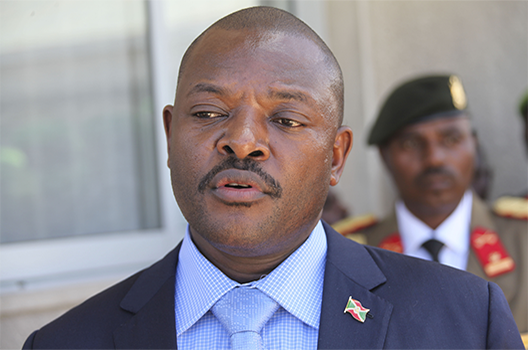 Burundians will go to the polls on Thursday, May 17 to vote in a constitutional referendum set to allow Pierre Nkurunziza, president since the end of the country’s civil war in 2005, an opportunity to stay in power until 2034.

The vote takes place amid a fragile domestic situation, and it is likely to deepen Burundi’s existing climate of fear, raise the likelihood of mass atrocities, and further accelerate regional democratic backsliding.

In 2015, Nkurunziza triggered a serious political crisis and attempted coup when he announced his intention to run for a third presidential term, which he promised was his last. Controversy centered around the constitution’s stipulation that a president may serve only two elected terms; when Nkurunziza’s legislative efforts to alter term limits failed, he argued that because he was selected by parliament following the end of Burundi’s twelve-year civil war, he was first “elected” by the people in 2010 and thus eligible to run in 2015.

The violence that followed Nkurunziza’s 2015 announcement and subsequent third term win killed more than a thousand people and led hundreds of thousands to flee into nearby Rwanda, Democratic Republic of the Congo (DRC), Uganda, and Tanzania. While the daily demonstrations that accompanied that period have since died down, a delicate truce is regularly punctuated by suspicious killings and disappearances. An International Criminal Court investigation into suspected war crimes perpetrated by presidential loyalists began last year.

In 2015, there was enough legal ambiguity to allow Nkurunziza to successfully pressure the country’s constitutional court into affirming his right to a third term. Nevertheless, that term will expire in 2020, at which point Nkurunziza is term-limited.

If approved, the referendum’s proposals would further entrench Nkurunziza and the ruling party’s power. Changes include lengthening the presidential term from five to seven years; adding a prime minister from the ruling party; and eliminating the two vice president positions—designed to enshrine ethnic and political diversity in the executive branch—in favor of one largely ceremonial role. The referendum also puts forward modifications to the constitution that would strengthen the ruling party’s legislative position by lowering the threshold for passing laws from two-thirds to a simple majority, among other proposed changes.

Nkurunziza’s pursuit of a third term ran counter to the spirit of the Arusha Accords, the peace and reconciliation agreement that ended the country’s civil war and underpins the current constitution. If passed, the current constitutional amendments more directly target the purposeful power-sharing system enshrined in the accords.

Since 2015, Nkurunziza’s rule has been marred by continued instability and sporadic violence, much of which has taken place under especially murky circumstances. Human rights groups estimate that thousands of people were imprisoned, more than a thousand killed, and hundreds of thousands forced to flee in the unrest since 2015.

While some Burundians support the proposed constitutional changes, the government’s conduct, including claims of forced voter registration and widespread voter intimidation, has eroded confidence in the prospect of a clean referendum. Opponents say that the ruling party has engaged in a “campaign of terror” to win. And the ruling party’s youth wing, the imbonerakure (“those who see far” in Kirundi), which is regularly accused of harassing, torturing, and killing real and perceived opponents, is also active. Last year, the United Nations condemned the imbonerakure for its disturbing calls to rape and murder opposition members.

Meanwhile, the Burundian government has tightened restrictions on civil society and the press, including banning Voice of America and the BBC and issuing warnings to Radio France Internationale and online Burundian news site Iwacu. Local journalists face license revocation, arbitrary arrest, and the threat of disappearance, causing hundreds to flee into exile since 2015. At least one prominent Burundian journalist has been missing for more than a year.

Earlier this month, the United States expressed concern over the Burundian referendum, citing its lack of transparency and incompatibility with the Arusha Accords. The European Union, which has sanctioned four Burundian officials since October 2015 for their roles in undermining peace, has also condemned the exercise. But other than periodic denunciations, the international community has generally failed to engage early or often enough to head off much of the current tension.

The widespread use of hate speech, not unlike that which galvanized killing in Rwanda’s genocide, has been a particularly concerning development in Burundi, especially given the fundamentally political—not ethnic—nature of grievances. While one ruling party official was tried and sentenced to three years in prison for comments that incited violence, the majority of politically charged speech goes unpunished and could play a role in inciting violence.

Burundi’s increasing authoritarianism does not take place in a vacuum, but it instead contributes to broader regional democratic backsliding. In neighboring DRC, Joseph Kabila’s presidential term expired in December 2016, though he continues to delay elections as unrest in the country’s east builds. In 2015, a whopping 98 percent of Rwandans voters affirmed constitutional changes that could allow President Paul Kagame to run for re-election in 2024 and 2029. In December 2017, the Ugandan parliament removed presidential age limits, paving the way for President Yoweri Museveni to run for a sixth term in 2021. And in Tanzania, President John Magufuli has restricted the country’s political opposition, civil society, and free press.

All signs indicate that Burundi’s constitutional referendum will be deeply flawed, not inclusive, and marred by serious irregularities. The potential for violence in its aftermath is very real—and history suggests that neither the violence nor its knock-on humanitarian effects will stay confined to Burundi. Given the inter-connected nature and the fragility of the African Great Lakes region, this prospect should be ringing alarm bells across the continent and in the West.

Kelsey Lilley was associate director of the Atlantic Council’s Africa Center. Follow her on Twitter at @KelseyDegen.