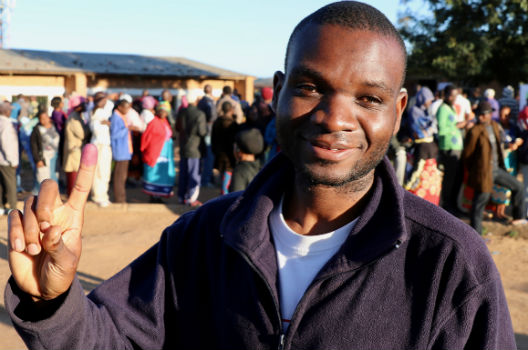 The use of white-out on results sheets in Malawi’s May election has brought international media attention to the small southern African country, leading some to dub the polls Malawi’s ‘Tipp-Ex election’ after the popular white-out brand. The opposition claims the entire election should be annulled, and their case has reached the high court, with a final decision due later in August. Claims of irregularities in African elections are all too familiar, but there is often a lack of data precluding substantive analysis. This is where Malawi is different. The country’s election commission has published the official results sheets from each polling station online, with every cross out and use of white-out available for all to see. This provides a unique opportunity to go straight to the source, reporting beyond the competing statements of the opposition and election commission.

On its face, the imagery of an election stolen by white-out is certainly compelling. One imagines election officials using white-out to downgrade the opposition’s vote totals in favor of the incumbent. Yet, upon a review of forms from almost 20 percent of Malawi’s 5,002 polling stations, the use of white-out appears to be more mundane. Of 894 forms carefully reviewed, 142 included white-out (16 percent) but only 18 (2 percent) implicated the votes of the major candidates. Shown in Figure 1 below is a more representative example of a whited-out results sheet: most of the white-out is concentrated away from candidates’ votes or merely revises trailing digits. Many other forms have even less white-out, changing just a few inconsequential digits.

As you can see, the results sheet is broken into two main parts: an accounting section at the top and the candidates’ vote totals on the bottom. In a random sample of 346 forms, choosing to look at one ward from each of the country’s 28 districts, 66.7 percent of all white-out cases (51 in total) were limited to the top of the form. The votes would have been counted one by one under careful party agent and observer scrutiny, but the accounting section required calculations and may have been less familiar to polling staff. Thus, a concentration of mistakes on the top of the form is reasonable and cannot be readily ascribed to fraud.

When looking at instances of cross outs in pen instead (totaling 179 forms), a comparable 61.5 percent implicated just the top of the form. Figure 2 shows that the distributions across the form are quite similar between white-out and cross outs, suggesting the two may have been functional substitutes. The opposition has not complained about cross outs, to the author’s knowledge, and their appearance to varying degrees on about half of all forms points more to normal human error or functional deficiencies in training than widespread fraud.

Figure 2: Sampled from 346 polling stations across all 28 districts (one ward chosen per district); includes 179 forms with cross outs and 51 forms with white-out.

Further, there is no obvious regional trend or concentration in white-out use. Notably, data from the districts the opposition has called for recounts in (ten in total) do not appear divergent or anomalous. In fact, within the random sample studied, the prevalence of both white-out and cross outs is marginally higher in the districts not singled out for recount. For additional verification, the author undertook a comprehensive review of each results sheet from four recount districts, two in the north and two in the south. Again, similar summary statistics were returned, allaying concerns that the random sampling failed to pick up clusters of fraud. Finally, it is noteworthy that white-out and cross outs show up as well in the parliamentary and local government results sheets from the same day. This undermines any notion that white-out was targeted only at the presidential results, despite the fact that the court case only implicates the presidential polls.

This analysis is intended not as a validation of Malawi’s election but to shed some light on what the use of white-out in the polls truly suggests. At the very least, it should be clear that white-out is not the sensational smoking gun the opposition and others have implied it to be. Still, a full audit is merited to resolve complaints and to verify that the election commission’s data releases are legitimate. In this context, the opposition should be applauded for pursuing legal channels of dispute, and it is positive that the judiciary has taken the allegations seriously. Above all, a lesson from Malawi is the power and potential of access to transparent data for election administration and monitoring. Data-driven analysis should become the norm and not the exception.