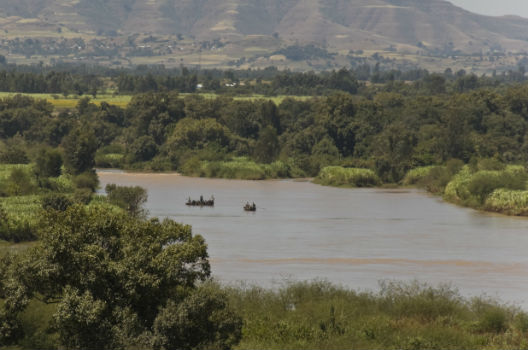 Over Egypt’s vocal dissent, Ethiopia is forging ahead with final construction on its ambitious Grand Ethiopian Renaissance Dam (GERD) on the Nile River, the lifeblood of nearly 500 million Africans. As the region’s population is expected to double to a whopping one billion people over the next three decades, the dam will become more of a flashpoint in an already volatile region, and the rising political tension bodes poorly for East Africa’s future stability.

In November, after months of disagreement over the release of an environmental impact study, Egypt withdrew from technical negotiations on the GERD’s construction. Cairo worries that the project gives its upstream neighbor Ethiopia too much control over the Nile, which is Egypt’s primary freshwater resource. Meanwhile, an escalating diplomatic crisis between Egypt and Sudan, ostensibly over water issues but exacerbated by fallout from the Gulf crisis, has hardened the divisions between Egypt and an emerging Ethiopia-Sudan alliance.

The project, which Ethiopia reports will be completed in 2018, has been a sticky regional issue since the country first announced its intentions to dam a tributary of the Nile River in 2011. Because the White and Blue Niles snake from the Great Lakes and western Ethiopia toward Khartoum, where they converge, the river’s management inevitably includes nearly a dozen countries with equities in the future of this region’s water—none of whom can agree on how to manage the basin.

In its diplomatic efforts, Egypt cites two colonial-era treaties as proof of its right to the lion’s share of the Nile. Both Ethiopia—which was excluded from both agreements despite the fact that it is the source of some 85 percent of the Nile’s waters—and Sudan, which was colonized at the time of the first agreement, reject those treaties.

Egypt fears that the GERD will compromise both its freshwater supply and electricity production of the Aswan High Dam. To Egypt, whose ancient civilization was wholly dependent on the Nile and for whom the river remains deeply meaningful, the prospect of Ethiopia being able to control the Nile is distressing.

As a result, Egypt has deemed access to the river a top national security issue. In 2013, Egyptian officials were caught on camera discussing a range of military options to sabotage the GERD, lending credence to rumors about Egypt’s hostile intentions toward the dam. Former Egyptian President Mohamed Morsi defiantly declared that he would keep “all options open” to maintain Egypt’s water supply, and in November 2017, President Abdel Fattah el-Sisi reaffirmed that stance, warning that “No one can touch Egypt’s share of water.” Rumors spiked again after a foiled March 2017 attack on the GERD, which Ethiopia blamed on rebels from its longtime foe Eritrea (Egypt and Eritrea’s warming relations and recent claims of Egyptian troops deploying to Eritrea remain the subject of intense Ethiopian scrutiny and suspicion).

Regardless of the outcome of GERD negotiations, Egypt faces looming water shortages exacerbated by population pressures, climate change, and an inefficient irrigation system. The Aswan Dam, a key driver of Egypt’s objection to the GERD, is itself a source of waste. Due to its location in the middle of the desert, some estimates suggest that an astounding 25 to 40 percent of the Nile evaporates each year from the reservoir at Lake Nasser.

Sudan: Stuck in the Middle?

Egyptian ire is also directed at Sudan for aligning with Ethiopia. While initially opposed to the GERD, Sudan has recently changed its tune after successive Ethiopian efforts to convince its East African neighbor of the project’s benefits.

In addition to an Ethiopian promise to sell Sudan a portion of the GERD’s power to jumpstart its economic ambitions, the country’s agricultural sector will also reportedly benefit from more stable river levels and decreased seasonal flooding—made possible as Ethiopia regulates the amount of water released from the dam’s reservoir. Sudan is hopeful that these improved conditions will allow it to capitalize on its 19 million hectares of underutilized but arable land.

A tit-for-tat diplomatic dispute between Egypt and Sudan has escalated since last summer as the two countries continue to trade immigration and trade restrictions. Turkish President Recip Tayyip Erdogan’s state visit to Sudan in December and Sudan’s agreement to lease a key Red Sea island to the some-time ally of Qatar and Iran was not well received in Egypt, which has backed the United Arab Emirates and Saudi Arabia in the Gulf crisis. Egypt is no doubt also alarmed by the appearance of divided loyalties from the Gulf states, which were traditionally allies in opposition to the dam, but are now investing in soon-to-be fertile agricultural land near the Nile in Sudan as a hedge for their future food security needs.

The Ethiopian government trumpets the GERD as transformative—a symbol of Ethiopia’s burgeoning economic “renaissance.” If estimates are correct, the dam could triple the energy supply to Ethiopia’s mostly rural population of 100 million and still leave $1 billion worth of energy to sell to its neighbors annually. The project has a $5 billion price tag—a hefty sum for a country at the bottom of the United Nations Human Development Index. While the GERD is largely financed without foreign assistance, China loaned $1 billion to Ethiopia for power infrastructure related to the project.

For some, the GERD is a source of Ethiopian pride. Billboards showing off gleaming renderings of the dam blanketed Addis Ababa, and Ethiopian citizens and its sizeable diaspora have raised hundreds of thousands of dollars through buying GERD bonds. Successful completion of the dam is also a much-needed win for the country’s embattled ruling party, which is trying to manage widespread political disenchantment and widening ethnic fissures after an increasingly repressive two decades in power.

But not all Ethiopians agree, including those who have been pressured into purchasing bonds, those displaced by similar “transformative” development projects, and those concerned about the unknown environmental impacts of the project.

Ethiopia expects to complete construction on the dam this year, though it doesn’t have to wait long to begin filling the GERD’s 74 billion cubic meter reservoir, which will allow power generation to begin. This is perhaps the most fraught time for the region, as filling the dam quickly will sharply affect the volume of water flowing to Egypt. Ethiopia maintains that filling the dam over five or six years will not significantly affect the volume of the Nile, except to make it more stable and predictable – but it is clear that the Ethiopian and Egyptian expectations of a “reasonable” timeline do not align (Egypt has suggested that the process take twelve to eighteen years). International assessments split the difference, suggesting that responsible filling should take between five and fifteen years.

Egypt’s legal challenge to water rights to the Nile rely on two treaties from 1929 and 1959. The former, signed by Egypt and Britain on behalf of its colonies, gave Egypt veto power over future developments that might impact its share of the Nile.

The 1959 agreement, signed by Egypt and a newly-independent Sudan, allotted specific amounts of the Nile, measured in billions of cubic meters, to Egypt and Sudan. But according to Sudanese officials, the irregularity of the Nile’s flow has prevented Sudan from ever using its “full” share of the Nile. In practice, Sudan’s under-utilization of the river has given Egypt access to more than its “share” of the Nile’s waters, pointing to the possibility of a looming Egyptian water crisis irrespective of GERD negotiations.

Ethiopia was excluded altogether from both the 1929 and 1959 agreement—a particular offense considering that Ethiopia’s Blue Nile makes up nearly the entire volume of the Nile proper. Other upper riparian states like Rwanda, Uganda, and Tanzania, which were still colonies at the time of signing, also reject these treaties.

Since GERD negotiations began, Egypt has been distracted by a series of internal political crises, allowing Ethiopia to quietly forge ahead on the GERD’s construction, build a supporting political alliance with Sudan, and alter the de facto water landscape in East Africa. As Egypt’s presidential elections approach and related domestic pressure mounts, the dam has snapped back into focus. Time will tell whether the region’s impending water crisis will metastasize into broader geopolitical conflict—though current indications don’t look good.

Image: Ethiopia's Blue Nile, which makes up 85 percent of the Nile River, snakes its way through Ethiopia, Sudan, and Egypt before emptying into the Mediterranean Sea. An Ethiopian project to dam the river has revived regional tensions. Photo credit: Flickr/A. Davey.