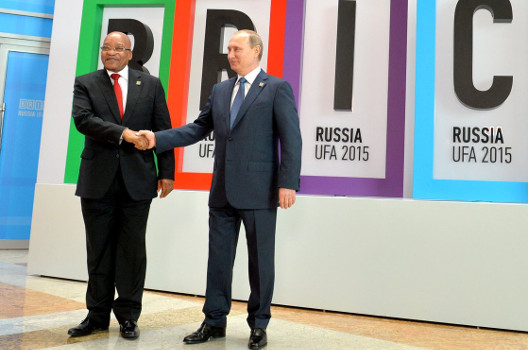 Last year, when it was first reported that South Africa’s ruling liberation movement, the African National Congress (ANC), would receive funding from the Chinese Communist Party for its new Policy School and Political Institute in Venterskroon, I and several other scholars—including Patrick Heller of Brown University and retired Ambassador David Shinn of George Washington University—drew more than a bit of criticism over our concerns that, as I told Time magazine, “Chinese money in significant amounts and influence could tip the ANC in the wrong direction.” As it turns out, it took less than a year for proof to emerge of just how much the foreign policy orientations of Africa’s second-largest economy have shifted.

The ANC is scheduled to convene its mid-term National General Council (NGC) in early October. The NGC is the ANC’s highest policymaking body in between the quinquennial meetings of its National Conference, empowered by the group’s constitution to “to ratify, alter or rescind any decision taken by any of the constituent bodies, units or officials of the ANC” as well as evaluate the performance of members of its National Executive Committee. Ahead of the NGC meeting, various subcommittees of the National Executive body have released documents which will form the basis of the upcoming deliberations. I am grateful to my friend Frans Cronje, President of the South African Institute of Race Relations, one of that country’s oldest independent liberal research organizations, for calling my attention to the foreign policy document published last week.

The international relations text, entitled “A Better Africa in a Better and Just World,” was drawn up by a panel chaired by Deputy Minister in the Presidency Obed Bapela that included such foreign policy heavyweights as South African President Jacob Zuma’s ex-wife, African Union Commission Chairperson Nkosazana Dlamini-Zuma; South African Minister of International Relations and Cooperation Maite Nkoana-Mashabane; Minister of Trade and Industry Rob Davies; former Director-General of the National Intelligence Agency Billy Masetlha; former National Commission of Police Bhekokwakhe “Bheki” Cele; and former Deputy Ministers for International Relations and Cooperation Ebrahim Ismail Ebrahim and Susan van der Merwe—in short, some of the very individuals who are responsible for the day-to-day management of country’s foreign relations. And how do these worthies view the world and their country’s place in it?

First, far from distancing itself from the Marxist-Leninist wreckage of the last century, the South African leadership reaffirms its ideological roots: “The ANC is revolutionary national liberation movement which is an integral part of the international revolutionary movement to liberate humanity from the bondage of imperialism and neo colonialism.” The text even goes so far as to quote the founder of the Soviet Union: “This theoretical formulation is affirmed by Vladimir Lenin when he maintains that, ‘revolutionary scientific theory is the weapon to make us judge and define the methods of struggle correctly. It is a weapon that helps us analyze and understand correctly the cause of development of human society at every moment, to analyze and understand correctly every turning point of society and to carry out the revolutionary transformation of society’.”

Far from celebrating the fall of the Berlin Wall a quarter of a century ago, the ANC document actually laments “the sudden collapse of socialism in the world [that] altered completely the balance of forces in favor of imperialism” because “it ushered in a new world hegemonic era of global socio economic agenda of capitalism and free market imperatives” wherein “the global economic trajectory is on a path to serve the interests of the international monopoly capital.” Chief among the ostensible beneficiaries of this new “imperialism” that has “plunged humanity in a perpetual socio-economic crisis” is none other than the United States, which stands accused of “effectively using its aggressive foreign policy to advance its national interests.”

Second, lest this be dismissed as so much pablum without real policy impact, the South African policymakers hail “the rise of emerging economies led by China in the world economy” as “herald[ing] a new dawn of hope for further possibilities of a new world order”:

China [sic] economic development trajectory remains a leading example of the triumph of humanity over adversity. The exemplary role of the collective leadership of the Communist Party of China in this regard should be a guiding lodestar of our own struggle.

In short, just as my colleagues and I worried might be the case, the ANC leadership has come to view China as the model for national development and that country’s Communist rulers worthy of emulation. Consequently, it is not surprising that, in recent years, South Africa has made its relationship with Beijing what is arguably its most important strategic tie—so much so that the ANC even claims, in intemperate language that even Chinese regime mouthpieces do not even use nowadays, that “the US, backed by its ideological apparatus, has tried a repeat of the Tiananmen Square against the Chinese government by parading to the world counter revolution as a popular uprising and counter revolutionaries as human rights activists.”

Third, its hostility to “US-led Western imperialism” also compels the ANC to embrace any and all who find themselves at odds with America and its European allies, as the tortured analysis of the confrontation with Vladimir Putin’s Russia highlights:

The US does not appreciate the resurgence of China and Russia as dominant factors in the arena of international power relations. It has instead declared a cold war against these two emerging world powers… Russia has not been spared the wrath of US-led Western imperialism. As with China, the Russian leadership is constantly being portrayed in the Western media and official discourse as monsters abusing human rights. As with China, counter revolutionary demonstrations and marches are being staged and given huge publicity in the Western media in order to destabilize and/provoke the Russian government… Whatever genuine concerns may exist within the Russian population and populations of former Soviet Union, there is a clear plot to exploit this in order to contain the rise of Russia globally. It is an encirclement strategy that seeks to isolate Russia in the manner that is being attempted on China as well… This is the context within which the crisis in Ukraine should be understood by the world progressive forces. The war taking place in Ukraine is not about Ukraine. Its intended target is Russia. As with China, Russia’s neighbors are being mobilized to adopt a hostile posture against Moscow, and enticed to join the European Union and NATO. Pro-West satellite states are being cultivated or as we saw with the coup in Ukraine, even invented, to encircle Russia and allow their territory to be used for the deployment of NATO’s hostile military hardware faced in the direction of Russia. These Western manoeuvers, directed from Washington, are reminiscent of Cold War. They have vowed in Washington that there will be Russia or China to challenge the US hegemony.

This analysis is stretched to other corners of the globe as well: “We see it unfolding in the streets of Latin America including in Venezuela which the US has strangely declared a threat to its ‘national security’, in the Middle East and in African countries with the sole intention of toppling a progressive democratically-elected governments.”

Fourth, the anti-US bias has not insignificant policy ramifications on the African continent, as witnessed by the ANC’s stance on the US Africa Command (AFRICOM):

The campaign to engage all [African Union] member state [sic] on the continent not to host these military bases continue [sic]; however, the question that should be posed is whether this is still preventable because in certain places on the continent AFRICOM has already established its footprint in the form of training soldiers and other newly devised mechanisms? The ANC has to deal with these realities and develop new strategies to take this campaign forward.

Fifth, moreover the anti-American mindset is segued by antipathy extended to close US allies in Africa and the Middle East like Morocco and Israel, both of which are singled out for extensive excoriation in the foreign policy document. The former country’s southern provinces are characterized as “one of the last bastions of colonialism on the African continent” and the ANC leaders pledge themselves to hold a “solidarity conference” for the Polisario Front separatists. With respect to the Jewish State, “the ANC has participated and will continue to participate in activities of the week-long program on Israeli Apartheid Week in solidarity with the Palestinians”; the document repeatedly references “the bombardment and the killings of innocent Palestinians by the Israeli military,” while not acknowledging any attacks on Israel, including missiles launched from Gaza.

On the eve of the historic 1994 polls which would sweep him into office as his country’s first democratically-elected president, Nelson Mandela penned a Foreign Affairs article on “South Africa’s Future Foreign Policy,” in which he laid out a strategy based on maintaining friendly relations with all major powers as well as his hope for a new form of statecraft anchored in the centrality of human rights, the promotion of democracy worldwide, respect for international law, and the conviction that “economic development depends on growing regional and international economic cooperation in an interdependent world.” In contrast to this broad vision, not even two years after Madiba was laid to rest, his successors have chosen to expend resources on small-bore objectives like the ANC’s  “discussion with the ruling parties of BRICS member states to sign a joint Memorandum of Understanding to promote stronger party-to-party relations… [which] will enable the parties to find common areas of cooperation… and present an alternative to the Washington Consensus.”

If the international relations document does indeed capture the mindset of the current ANC leadership—and there is little indication that it doesn’t—and if those politicians stick to their chosen course, the shift in South African foreign policy away from the balanced approach championed by Mandela will be a tragedy not only for the “Rainbow Nation” itself, but, indeed, for international society as a whole.