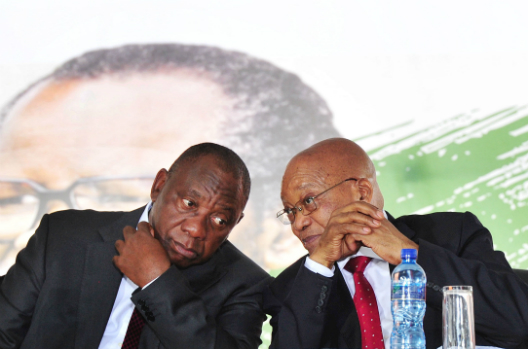 President Jacob Zuma and Deputy President Cyril Ramaphosa at the Freedom Day celebrations held in Manguzi, uMhlabuyalingana in KwaZulu-Natal under the theme "The year of OR Tambo: Together deepening democracy and building safer and crime free communities. Photo credit: GovernmentZA

Since Jacob Zuma took office in May 2009, South Africa’s economy has been a story of low-to-no growth, flagrant corruption, and extreme inequality. Indeed, his erratic policies have twice spiraled the economy into recession (in 2009 and 2017), resulting in significant slashes to the country’s credit rating and an overall downgrade of the country’s brand. The recent victory of Cyril Ramaphosa at the African National Congress (ANC) conference in December injected a sense of hope into the political and economic environment.  In his proposed “new deal,” he outlined economic growth targets of 5 percent by 2023 and an initiative to create one million new jobs in an effort to reduce South Africa’s unemployment rate, which hovers stubbornly over a painfully high 26 percent.

President Jacob Zuma’s February 14th resignation will certainly be welcomed by the business and investor community alike, but the fundamentals of the South African economy spell continued slow growth for the foreseeable future. To dramatically improve South Africa’s economic trajectory, a President Ramaphosa will have to tackle the country’s most pervasive and difficult economic challenges: labor market rigidity, quality education, and economic disparity.

One of the major causes of South Africa’s economic woes over the last decade has been the rigidity and broader inefficiencies of its labor market. It is an economy burdened with vast unskilled unemployment but historical structures oriented around high-skilled capital-intensive industries. Today, almost 50 percent of South Africa’s economy is rooted in capital-intensive industries, with finance and business services leading the way. The most recent World Economic Forum Global Competitiveness Report underscores a number of the country’s shortcomings in this area, highlighting its poor performance vis-à-vis employer-to-employee relationships, wage flexibility, and labor laws. Indeed, the report ranks South Africa 97th out of 140 economies surveyed for labor market efficiency and 135th in hiring and firing practices. These inefficiencies discourage employers from hiring new employees and hinder the market’s ability to absorb new workers, particularly those vying for low skilled jobs.

A high-skilled economy would be possible for South Africa if the country had a solid track record of mass and rapid skill transfer. Instead, South Africa has become infamous for its poor education system. With many problems rooted in the legacy of apartheid and racist policies such as the Bantu Education Act of 1953, through which educational redlining ensured that Blacks received an education that would limit their socioeconomic mobility, the country still struggles with segregation by race and income, with the top 20 percent of schools outperforming the rest by astonishing margins. There have been disturbing stories of text books being burnt to hide corruption and dramatic levels of teacher absenteeism. Indeed, a 2015 Organization for Economic Cooperation and Development (OECD) table of seventy-six education systems ranked South Africa second-to-last in mathematics and sciences.

South Africa’s poor education system not only hurts its students in the immediate term, but also damages future generations of workers who will lack the skills needed to obtain the select few jobs that are available to them. Bold reforms are necessary to improve this, ranging from repurposing spending in favor of mobile learning to implementing vocational training to using approaches like blockchain to verify relevant work experience and performance.  Without dramatic interventions in low-income education, South Africa’s economy will continue to exclude those left behind by its crumbling education system and stymie growth.

Lastly, tackling South Africa’s dangerous wealth gap is imperative to improving its economic fundamentals. With just 10 percent of the population owning close to 95 percent of all assets and earning close to 60 percent of income, South Africa is one of the most unequal societies in the world. The country’s economic inequality – measured by the Gini Index – has remained consistently above 60 percent since the early 1990s, despite marginal gains in economic growth and government efforts, albethey incomplete, to reduce wage inequality. Programs such as broad-based, black economic empowerment have failed to deliver enough of a reduction in inequality and it is no wonder that social instability, illustrated by high crime rates, continues to plague the country.

In his first months as leaders of South Africa’s governing ANC party, Ramaphosa promised to inject life back into the party (which has struggled for purpose after more than two decades in power) and crack down on the crony corruption of the past administration. He has also committed to an aggressive plan to rescue the economy and recapture the support of South Africans disillusioned by the anemic economic growth throughout the Zuma years.  The success of such a plan is yet to be determined, but he should leverage the good will and optimism that will follow a Zuma resignation by moving quickly on meaningful reforms. A Ramaphosa “new deal” with teeth—the willingness to address hard political issues and commitment to rapid implementation—could pave a new path for South Africa into the future.  Now is the time to attack the many bottlenecks that hinder the country’s economic prosperity and gain global confidence in the process.