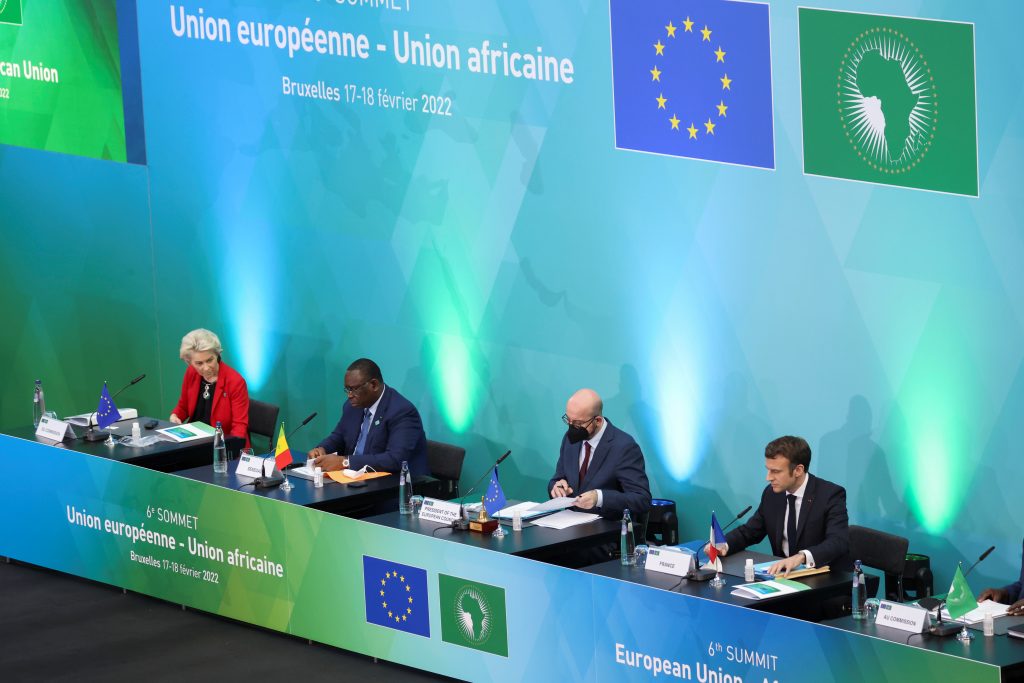 On February 18, leaders of the European Union (EU) and the African Union (AU) convened in Brussels to announce a “renewed partnership” and a Joint Vision for 2030. Six days later, Russia’s invasion of Ukraine upended such long-term planning for Europe and most of the world.

The war in Ukraine has disturbed Europe’s stability and has sent shock waves throughout the international system. However, the “unprecedented and mounting common challenges” referenced in the Joint Vision have only intensified with the new conflict. For both Europe and Africa, a strengthened relationship is more imperative than ever.

On the other side of the Mediterranean, African economies have seen the prices of food, fuel, and fertilizers skyrocket as imports from Ukraine and Russia have ground to a halt. The inflation has amplified food scarcity throughout the continent with millions of people in the Sahel and the Horn of Africa at risk of extreme hunger. While Africa was trying to recover from the economic consequences of COVID-19, African leaders have turned to the international community for increased awareness of the critical impact on their countries of a war they have nothing to do with. On June 3, AU chair Macky Sall, the president of Senegal, met Russian President Vladimir Putin requesting the release of food supplies that have been blocked in the Black Sea.

This meeting made headlines worldwide for its unprecedented diplomatic impact.

This was much more than a simple humanitarian request expressed by some African begging for help. First, it was a signal of Africa’s existence on the international scene as a significant player. Sall did not simply represent his country, but rather fifty-four states as chairman of the African Union. Second, Sall’s voice represented non-aligned nations. Africa spoke in the name of its own interests and not as an annex of global powers.

This new global assertiveness could also serve as the seed for renewed cooperation between Africa and its partners, including Europe.

New EU sanctions banning oil imports from Russia will likely exacerbate Europe’s fuel scarcity, especially in the short run. The United States is exporting large volumes of oil and gas across the Atlantic Ocean. However, Europe also has alternative suppliers in Africa that it could tap.

Africa’s extensive fossil fuel reserves and proximity to Europe could allow it to help EU states wean themselves off Russian energy, and governments are wasting no time fortifying relations with key suppliers. Italian officials have already secured new deals with Algeria, Egypt, Angola, and the Republic of Congo to replace nearly two-thirds of the country’s Russian gas supply, while German Chancellor Olaf Scholz visited Dakar in May to discuss the development of natural gas projects off the coast of Senegal.

But these resources cannot be taken at the expense of Africans’ critical needs for development. That is why in the name of mutual and shared benefits, Europe must consider the advantages of financing African fossil fuel projects, especially given Africa’s relatively tiny contribution to carbon emissions and surging global demands for fossil fuels. This can jumpstart the development of critical infrastructure and expand local access to power in several African states that have made discoveries in natural gas.

The long-term vision of EU-AU energy cooperation must remain the facilitation of a complete transition to net-zero carbon emissions. As EU ministers look to accelerate the implementation of the European Green Deal, African states can once again serve as promising trade partners to help make the plan a reality. The African continent’s geography offers enormous potential for wind, solar, geothermal, and hydroelectric power, while also being home to some of the richest deposits of critical minerals and rare-earth metals essential for green technology.

As with fossil fuels, this isn’t a one-way street. The African continent has been severely impacted by environmental crises underscoring the urgent need for climate-resilient development in collaboration with the world’s leading polluters. European investments in African clean energy capacities and adaptation programs represent an opportunity for the wealthier continent to secure its renewable future by importing green energy while taking actionable accountability for its role in greenhouse gas emissions.

The announcement of a 150 billion euro Global Gateway Investment Package last year is an encouraging commitment from the EU to Africa, but it needs to be followed by consistent, responsible, and sincere diplomacy to make sure the investments deliver in a transparent way.

For the alignment in interests between Europe and Africa — whether on energy or climate change — to work, what’s most important is a rest of the former’s mindset about the latter. For centuries, European colonialism and slavery plundered Africa, robbing its men and natural resources. However, Africa is changing: Already home to the world’s youngest population, Sub-Saharan Africa is poised to become home to nearly one quarter of the planet’s population in twenty years. Africa is experiencing the emergence of a three hundred million-strong middle class-trade area in the world by number of participant countries, since the start of the millennium.

The continent does not need only assistance and humanitarian aid. Its strategic transformation points to the beginning of a new geopolitical order that is not reflected in the international development architecture. If it stands by Africa in advocating for deep reforms to Bretton Woods institutions, Europe will strengthen its relationship with its growing neighbor.

That’s an area where Europe has work to do—despite its geographical proximity and historical links. Apart from France, China, and the United States, a series of other players—India, Russia, Brazil, Turkey, and the Gulf countries—have rapidly expanded and diversified their partnerships with Africa.

While the EU remains the continent’s leading multilateral partner, with trade reaching $245 billion by 2018, China rules the roost bilaterally, with $254 billion in trade in 2021. China is also Africa’s largest foreign aid donor demonstrating that it is no longer content building bridges and hotels.

Moreover, Europe’s traditional taunts at Africa over its relationship with China aren’t working. Fears that Chinese debts are toxic and that Russia’s war could set dangerous precedents aren’t enough to dissuade African nations from choosing their partners freely according to perceptions of their interests, as their diverging United Nations votes on the war in Ukraine have shown. From the perspective of African nations, the mistreatment of their students at the Polish border early in the war and the West’s reluctance to share vaccines initially during the COVID-19 pandemic are examples of why they must stay non-aligned.

At the center of the populist rhetoric and actions that migrants, for instance, often face when seeking to move to Europe, is a pessimistic and paternalistic approach toward Africa. For a decade now, remittances from the African diaspora have outstripped international aid to the continent. Citizens of African countries aren’t threatening to swamp Europe: 70 percent of African migrants remain within the continent. Even with high birth rates, Africa’s population density is closer to Europe’s than to the relatively cramped nations of China and India.

This does not mean turning a blind eye to the tragedies of migrants crossing the Mediterranean to reach Europe. Instead, it’s important to recognize the biases that people fleeing Africa face and how these biases impact the relations between the two continents. With most African migration now occurring within the continent rather than to Europe, there are signs that those attitudes are reducing Europe’s appeal to Africa’s younger generations. Europe’s admirable compassion toward Ukrainian refugees has reminded African migrants that they’ve never received similar benevolence while escaping equally perilous conflicts.

European leaders such as German Chancellor Olaf Scholz have committed to working on reestablishing grain exports to Africa as AU officials focus on stemming food insecurity amid the war in Ukraine. To combat the spread of terrorism, another key issue for the AU, the European Union has agreed to continue its support of “African-led Peace Support Operations.” This week, at the UN Security Council, the Europeans have advocated for a renewal of the MINUSMA whose mandate will expire on June 30 despite the degradation of the relations between Paris and Bamako.

Irritants in the relationship persist: The EU, for instance, continues to resist the demands of AU leaders calling for short-term intellectual property rights waivers to expand COVID-19 vaccine access in Africa.

Still, opportunities for renewed Europe and Africa cooperation remain abundant. The effects of the coronavirus pandemic, as well as recent outbreaks of monkeypox in Europe, are reminders that both continents remain highly vulnerable to health emergencies. The success of vaccine production in Europe and the ability of African health authorities to contain monkeypox outbreaks without the use of vaccines or antivirals may signal a need for greater research exchange and scientific cooperation. Food security in Africa is also in Europe’s interests, as it will help to curb mass migration.

Beyond the emergencies, there is an unprecedented opportunity to reshape the international financial architecture and better address African challenges. At the 2022 United Nations Economic Commission for Africa Conference of Ministers, Sall strongly advocated for a renewal of the multilateral system, stressing the necessity to create an African credit rating agency to fight anti-African bias among global rating agencies that overstress African risk, preventing countries from borrowing at acceptable rates. Sall also called for a new agreement on International Monetary Fund Special Drawing Rights, reserve assets that can be exchanged for hard currency and are allocated based on the size of a country’s economy—meaning that the entire continent received less help for COVID-19 recovery than the United States, Japan, China, and Germany individually.

As it resets ties with Africa, Europe must stand by Africans’ side to engage these important reforms and build a fairer international financial system and a more democratic international governance. If not, the risk is to let Africa build an alternative multilateral system without their traditional partners. From China and the United States to Russia and India, African leaders have multiple potential partners vying for a stake in the continent’s future.

It is up to Europe to win Africa’s attention and affection. For that, it must do something it has never quite done before: stand shoulder-to-shoulder with African nations as equal partners.

Rama Yade is senior director of the Atlantic Council’s Africa Center and a senior fellow at the Europe Center. She is a professor at Sciences Po Paris and Mohammed 6 Polytechnic University in Morocco. She was a member of the French cabinet, serving as deputy minister for foreign affairs and human rights and ambassador to UNESCO.

The transatlantic partnership in Africa

A conversation on the joint vision for a renewed partnership that EU and AU leaders agreed to at the EU-AU Summit and its relevance in the context of EU-U.S. cooperation in Africa.