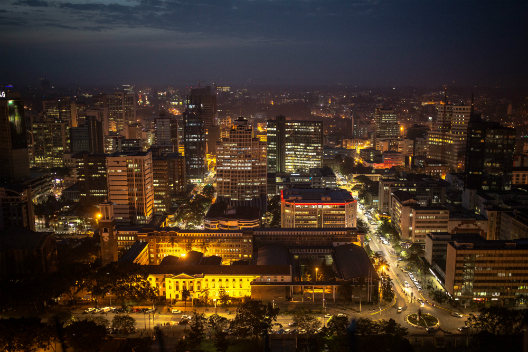 In popular imagination of Africa, the continent is more famous for its savannahs than its skyscrapers. Sub-Saharan Africa’s total urbanized population is just 37 percent, compared to nearly 75 percent of European Union citizens who live in cities.

Africa’s rural population has always been larger than its urban population. But that is changing, and in 2030, the number of urban and rural Africans will be roughly the same: nearly 1.6 billion people altogether. By 2050, nearly two-thirds of all Africans will live in cities. By the same year, nearly a quarter of the world’s workforce will be African—and these workers will be overwhelmingly young.

Africa is the second-fastest urbanizing continent, following closely behind Asia. It is home to three “megacities,” each with more than 10 million residents: Kinshasa, Lagos, and Cairo. By comparison, New York City is the largest city in the United States, topping out at 8.5 million residents. In the coming decades, Johannesburg, Luanda, Nairobi, Addis Ababa, Casablanca, and Khartoum will approach megacity status, and hundreds of other smaller African cities will emerge and grow.

Urbanization does not automatically translate into prosperity. But it does seem to be a prerequisite for sustainable growth. As Africa’s growing, youthful workforce moves to cities, they will become a growth engine for the continent’s economy.

By concentrating consumers and their spending, Africa’s cities can serve as new markets for goods and services. In just fifteen years, consumer spending in African cities is projected to reach $2.2 trillion, a three-fold increase from current levels. These markets will attract attention and investment from both international brands—including clothing, restaurant, and hotel chains catering to African consumers—and local industries that reflect a city’s unique culture. Cities, by design, concentrate people, and these populations form the backbone of valuable urban industries such as manufacturing. The increased business will prime the pump for more government revenue, job growth, and infrastructure investment. These benefits of “agglomeration”—having thousands of people in close spatial proximity to each other—also apply to governments, who face lower service provision costs among dense populations.

Successful cities support strong and stable agriculture by making up the key market for Africa’s many smallholder farms. Concentrating consumers in urban areas benefits such farms, which contribute to urban food security and remain an integral part of the continent’s overall economy.

For entrepreneurs, opportunities are ripe for the picking. Africa’s urban challenges—construction, housing, financing, and communications infrastructure, among others—benefit from the educated citizens and private investment concentrated in cities. In fact, the most innovative and successful businesses have emerged from obstacles to growth; market inefficiencies led to the development of products ranging from cell phones to mobile money to Uber.

Kenya’s support for tech incubator iHub is an example of how African governments can support fast-growing and valuable new industries that harness the creativity of the urban workforce. Nigeria has announced a similar focus on information and communications technology with its SmartCity Innovation Hub in Lagos.

In spite of its enormous size, Nigeria’s largest city, Lagos, is a prime example of how to govern a megacity. Lagos residents—21 million and counting—benefit from strong local leadership, which has reformed the city’s tax system and used the increased revenues to provide services including waste collection and improved transport systems. The city was integral to preventing the spread of Ebola in Nigeria in October 2014 after an infected Liberian man traveled to Nigeria and later died in a Lagos hospital.

While rapid urbanization has many benefits, it is also a double-edged sword.

Africa’s developing economies have limited time to grapple with serious demographic challenges—including an urbanizing, “youthening” population—while bringing broad economic growth to their populations. And rapid urbanization brings with it very real threats to prosperity and stability. The first is that urbanization is outpacing the ability of fragile governments and developing economies to support their citizens. Financing and building vast infrastructure to accommodate burgeoning urban populations is a critical challenge. As Africa Center Senior Fellow Aubrey Hruby observed last year, Africa needs some $50 billion in infrastructure investment annually.

In recent years, China has been one of the most eager investors on the continent, alleviating this infrastructure challenge through concessional and commodity-backed loans. But China’s current economic slowdown and weakened global commodity prices will slow its pace of African investments and curb access to the large pot of Chinese infrastructure financing.

Governments are also struggling to keep up service provision in rapidly expanding cities. Many African governments are already stretched to deliver basic housing, health, education, and public safety to their populations. Vast African slums in cities like Nairobi or Johannesburg, with poor access to clean water, sanitation facilities, electricity, and durable shelter, compound concerns that urban poverty and unemployment can lead to criminality, gang violence, or even radicalization. Education systems will have to keep up with growing populations and industries. Governments, in turn, will have to promote private investment and support new job creation.

A new Atlantic Council study by J. Peter Pham and Aubrey Hruby, Embracing Impact: How Africa Can Overcome the Emerging Market Downturn, outlines how the current emerging market slowdown will constrain African budgets and threaten the steady economic growth many African countries have achieved over the past decade.

Urbanization is a silver lining to these worrying predictions. If managed properly, cities will become Africa’s growth engine and fuel continent-wide investment and development.