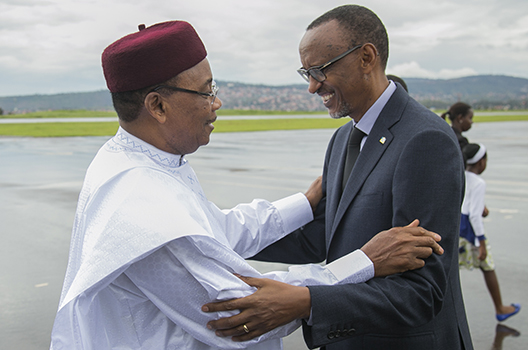 Last month, the leaders of forty-four African nations signed a framework agreement to form a continental free-trade zone that will encompass a billion people and up to $3 trillion of cumulative GDP. The African Continental Free Trade Area (AfCFTA) would be the largest free trade agreement since the founding of the World Trade Organization over twenty years ago, and seeks to create “a single continental market for goods and services, with free movement of business persons and investments.” The agreement is an important stepping stone towards a continental customs union, pan-continental socioeconomic integration, and a more economically self-sufficient Africa.

Unquestionably, the AfCFTA has immense potential to facilitate a virtuous economic growth cycle for the continent. The United Nations Economic Commission for Africa (UNECA) argues that it could double trade figures if tariff rates and non-tariff barriers are reduced, generate much needed employment for Africa’s bulging youth population, and attract new investors to a single African market. However, policymakers must think hard about the long-term distributional consequences of the AfCFTA while navigating the long road to implementation so as not to fall into inequality traps, leaving some economies worse-off and blocked out of global value chains.

The Long Road to the AfCFTA

The AfCFTA is not the continent’s first call for greater economic integration. In 1980, the Lagos Plan of Action for the Economic Development of Africa was spearheaded by the Organisation of African Unity to push Africa’s resource-intensive economies towards industrialization and greater regional integration. Coupled with the 1991 Abuja Treaty, the Lagos Plan of Action proposed the creation of Regional Economic Communities (RECs), with the hope of improving regional economic integration and advancing certain peace and security initiatives. Unfortunately, with the possible exceptions of the East African Community and the South African Development Community, most of the eight RECs recognized as the “building blocks” of the African Union (AU) have struggled to yield the results necessary to spur substantial economic growth and harmonize the continent’s disparate markets. This is due in part to the difficulty several RECs have had in creating economies of scale – especially in the context of Africa’s balkanized markets – that can be competitive in a regional (and global) marketplace. Moreover, the fact that several countries belong to more than one trade block undermines regional economic integration efforts and puts burdensome strains on member states’ capacities to cope with often contradictory requirements. Many claim Africa’s twisted, tangled, and entwined RECs evince Jagdish Bhagwati’s “spaghetti bowl effect,” with a country such as Tanzania belonging to two RECs and five different regional organizations.

At just 18 percent, Africa has the lowest levels of intra-continental trade of any continent. While the continent’s trading blocs have helped to improve these figures, Africa’s trade with itself is a far cry from the levels witnessed in Latin America (35 percent) and Asia (45 percent), and intra-continental trade has been substantially outpaced by trade with the rest of the world – often by as much as 90 percent. Trade among African countries accounts for just 7 percent of the continent’s GDP, and its overreliance on commodities for extra-regional trade makes it dangerously exposed to commodity price shocks and the major ebbs and flows of global capital markets.

As Africa’s non-commodity exports and manufacturing industry grow, the AfCFTA could catalyze further prosperity. While more than 75 percent of Africa’s global trade spurs from the extractive sectors, intra-African exports are generally more diversified, with manufactured goods accounting for more than 41 percent in 2014. Given the labor-intensive nature of manufacturing, and the AfCFTA’s proposed measures to lower intercontinental trade costs and facilitate investment and the formation of regional value chains, African governments have high hopes that the agreement will help the sector contribute to trade and economic growth, bringing with it much needed employment for the continent’s growing working age population – expected to be the largest in the world at 26 percent by 2050.

What’s the Potential Impact of the AfCFTA?

The implementation of the AfCFTA is still far from completion, pending a long process of consultations, reviews, and formal ratification by twenty-two countries. Its potential, however, is tremendous.

The AfCFTA should make doing business on the continent easier. For Africa’s small and medium-sized enterprises (SMEs), which account for approximately 80 percent of the continent’s businesses, the agreement will put measures in place that allow companies to tap regional markets that they might not otherwise access through preferential trade regimes, transit and customs cooperation, and tariff reductions on intermediate and final goods. These measures should improve the risk-return profiles of participating countries and bring new investors to the table. Moreover, preexisting assistance programs, including the Action Plan for Boosting Intra-Africa Trade, coupled with domestic initiatives like Rwanda’s National Internship Program that aim to upskill and reskill the labor force, should help African enterprise to become bigger, better, and more competitive in the global marketplace. The UNECA has predicted that the AfCFTA’s various measures to spur trade could increase intra-continental commerce by as much as 52 percent by 2022.

In addition, this agreement underscores the continent’s determination to work together and “progress toward the ideal of African unity.” A single African market gives the continent greater opportunities to exert leverage over its non-African trading partners such as the European Union to eliminate trade barriers and attain a better seat at the table in the international system. As Nigerien president Issoufou Mahamadou, who has shown tremendous leadership in fighting for the AfCFTA, put it, “Africa is stronger when we work together.”

Will the AfCFTA be win-win for all involved?

As we have seen time and time again, trade liberalization and free trade agreements create winners and losers. One of the major challenges to harmonizing Africa’s heterogeneous economies under one agreement is the wide variation that exists in their levels of development. For example, Egypt, Nigeria, and South Africa together account for well over 50 percent of Africa’s cumulative GDP, while Africa’s six sovereign island nations collectively account for just 1 percent. The AfCFTA has the greatest levels of income disparity of any continental free trade agreement, more than doubling the levels witnessed in ASEAN and CARICOM. As African countries start to become increasingly integrated in global value chains, and the AfCFTA pushes both intra- and extra-regional trade, it is essential that participating countries build an efficient and inclusive institutional architecture so as not to leave any economies behind. Without sound policymaking and preferential treatment to Africa’s most at-risk economies, the AfCFTA could prove to be a force for economic divergence rather than a force for good.

Africa’s most diversified economies, such as Ethiopia, Rwanda, and Côte d’Ivoire, are likely to benefit most from the free-trade zone in the near term. Countries like South Africa and Kenya, with larger manufacturing bases and more developped transport infrastructure, are likely to benefit from greater economic integration. Ethiopia, with its quickly growing manufacturing sector, could use the AfCFTA to build new and improved export destinations for its products and services across the continent and beyond. The free movement of people could also help to draw new expertise to its booming agriculture and construction sectors, respond quickly and innovatively to market trends, and push key industries to new heights.

Africa’s resource-dependent economies, such as Chad, the Republic of Congo, and Zambia, could see limited income gains and risk losing their competitive advantages as more diverse economies increase productivity and human capital capabilities and gobble up the industries on which smaller, less developed economies rely. Policymakers must take into consideration the specific requirements of these markets, develop strong safety nets, and monitor the effectiveness of accompanying measures to the agreement very closely through the proposed Trade Observatory.

Through the AfCFTA, a majority of African countries have shown a commitment to facilitating increased intra- and extra-regional trade, much needed job and GDP growth, and a more prosperous and self-sufficient economic future for the continent. However, much is yet to be done, and two of Africa’s largest players – Nigeria and South Africa – have yet to sign. For the AfCFTA to be as successful as many hope, leaders must take the time during the next round of negotiations, scheduled to begin later this year, to further develop an efficient and inclusive institutional architecture that, once implemented, unlocks Africa’s full economic potential.

Jonny Gass is an assistant director in the Atlantic Council’s Africa Center. You can follow him on Twitter @JonnyGass.

Image: Rwandan President Kagame welcomes President Mahamadou Issoufou of Niger in Kigali, Rwanda, ahead of the 10th Extraordinary Summit of the African Union. (Government of Rwanda/Flickr)