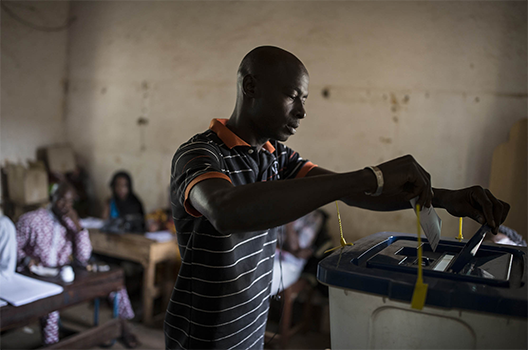 Scene from a polling station in Bamako during Mali’s presidential election on 29 July. (MINUSMA/Marco Dormino)

While the July 30, 2018, general election in Zimbabwe—the first in almost four decades where longtime ruler Robert Mugabe won’t be on the ballot—has been attracting a great deal more attention, the presidential election in Mali one day earlier matters just as much and, arguably, is even more important to the security and geopolitical interests of the United States and its European allies.

Although a first-time visitor to Bamako, the sprawling Malian capital on the banks of the Niger River, might not know it from the rapid urbanization of the fastest growing city in Africa (and the sixth-fastest in the world) and the booming economy that saw real GDP jump 5.5 percent last year, just six years ago this was a failed state. After two decades of enviable constitutional order that caused then-Secretary of State Hillary Rodham Clinton to hail the country as “a model of stability and democracy in sub-Saharan Africa,” Mali collapsed under the combined pressure of tribal separatists allied with Islamist extremists, both reinforced with weapons and fighters that flowed freely from the wreckage of Muammar Gaddafi’s Libya. Angered that they were left so poorly equipped to fight the rebels, the elements of the military overthrew President Amadou Toumani Touré just weeks before he was scheduled to step down at the end of his second and final term of office. Amid the ensuing chaos, the separatists and their Islamist allies seized control of the northern two-thirds of the country. It took a French-led military intervention in early 2013 to prevent the militants from overrunning the rest of the country and, ultimately, to drive them from the provincial capitals they had occupied.

In the wake of Operation Serval, elections were quickly organized which, while the results clearly reflected the will of the Malian people—a majority of registered voters took part and, in the second round, almost 78 percent cast their ballots for Ibrahim Boubacar Keïta, a former prime minister commonly known by his initials “IBK”—it was also evident that even if the polls might have been “good enough” under the circumstances, there was plenty of room for improvement.And the ensuing years have not been easy. While President Keïta’s government reached an “agreement for peace and reconciliation” with the ethnic separatists in 2015, its implementation has been hobbled, in part because of the ongoing insurgency by the Islamist extremists whom the separatists brought into their fight earlier in the decade. These jihadists who, as I pointed out in congressional testimony last year, align themselves varyingly with either al-Qaeda or the so-called Islamic State, have given rise to ever-increasing violence as they “literally compete to outdo each other in the Sahel in the hopes of attracting recruits and other resources.” Thus despite the dubious distinction that the 15,000-strong United Nations Multidimensional Integrated Stabilization Mission in Mali (MINUSMA) enjoys for being the deadliest peacekeeping operation in the world for four straight years, the UN Security Council unanimously adopted Resolution 2423 late last month, extending mission’s mandate for another year during which it will be joined by some 250 Canadian troops who recently began arriving in the country. Moreover, the deadly October 4, 2017, ambush of US Special Operations Forces by Islamic State in Greater Sahara militants in Niger, not far from the porous border with northern Mali, only underscored the seriousness of the threat emanating from this part of the Sahel.

The impact of the insecurity goes well beyond counterterrorism concerns, as worrisome as these are in and of themselves. The violence, coupled with poverty and governance challenges, also contribute to the flow of Malian migrants trying to reach Europe: a study last year by the Africa Center for Strategic Studies at the National Defense University found Mali ranked sixth among African countries in absolute terms of migrants crossing the Mediterranean and second in terms of migrants per capita making the voyage. Even more than a source of illegal migration to Europe, Gao in northeastern Mali is a major transit hub with smugglers and other human traffickers exploiting the government’s struggles to funnel more than 40,000 people annually to embarkation points in Algeria and Libya, according to 2017 research by the Netherlands Institute of International Relations Clingendael. With the more immediate threats they face from jihadists as well as separatists, it is understandable why, however sympathetic they may be, helping Europe with its migration crisis may not be the highest priority for Malian officials, especially given the lack of resources to invest in the effort.

Within Mali, despite not-insignificant progress since the 2012 coup, the security situation remains precarious, especially in the northern and central regions where just last week militants fired mortars on the airport in Sevaré, which is both the base of a MINUSMA contingent and the headquarters of the G5 Sahel counterterrorism force made up of soldiers from Burkina Faso, Chad, Mauritania, and Niger, as well as Mali, and shelled a town in the Kidal region during the voting on Sunday, an attack that Jama’at Nusrat al-Islam wal-Muslimeen, an umbrella group linked with al-Qaeda, claimed credit for. Not surprisingly, this insecurity has fueled tensions between various groups and intercommunal violence is on the uptick, with the United Nations High Commissioner for Human Rights reporting close to 300 civilians killed so far this year, three-quarters of them in the central Mopti region. To their credit, Malian authorities have acknowledged that some soldiers have been implicated in recent atrocities and Defense Minister Tièna Coulibaly, formerly Mali’s ambassador in Washington, quickly ordered an investigation by military prosecutors.

Fears of violence have, of course, raised concerns about whether the election can be deemed credible. While the importance of the legitimacy of the process cannot be underestimated, one should be careful of those whose motives for raising questions may be self-serving. Here, details matter. Much has been made of the potential for insecurity in parts of the country disenfranchising voters. While Malians have organized 23,041 polling stations for the 8,000,642 registered voters across the country as well as abroad, the numbers of those impacted by the violence, while important, is less than might appear by simply looking at a map. At a news conference after the polls closed, a campaign manager for Soumaïla Cissé, viewed by most observers as the leading challenger to the incumbent, claimed that 644 polling stations had not been able to open because of insecurity. However, since he did not specify where these places were, it is impossible to determine the magnitude of the problem alleged. For example, together, the Gao, Tombouctou, and Kidal regions—an area larger than Texas and Oklahoma combined—constitute two-thirds of the territory of Mali and has been the stage for much of the conflict since the beginning of this decade. Yet, the three regions are home to less than 9 percent of registered voters, a figure not much larger than the proportion of the electorate in the diaspora (who, under Malian law, are entitled to vote in specially-organized polling stations where large émigré communities are found).

Furthermore, it is worth noting that if voter turnout seems disappointing, the figures should be taken in historical perspective: since the advent of democracy in Mali in 1992, voter participation in the first round of a presidential election has exceeded 50 percent only once, in 2013, when just over 51 percent of registered voters cast a ballot. In the prior four elections, turnout never exceeded 40 percent (and, in fact, twice did not even reach 30 percent)—and this was during a period when jihadist terrorism was not that big of a concern. Whatever the final level of voter participation, the deployment of some 30,000 police and military personnel across the country to provide security permitted what the correspondent for Le Monde described as “an almost normal voting day” despite the isolated attacks by militants, a judgment echoed by international election observers who, according to Jeune Afrique, noted that “overall the vote was calm in the capital, Bamako, and no major incidents were reported.”

Perhaps the most significant demographic bloc courted by the candidates in the run-up to election day was the country’s young people: more than 60 percent of the population is under the age of 25 and many of them were choosing a president for the first time. For many of these young voters, the main issues revolve around jobs and opportunities. Notwithstanding the positive macroeconomic trends and significant natural resources—inter alia, the country is the third-largest gold producer in Africa—Mali still ranks 175th out of 188 countries and territories on the UN Human Development Index for 2017. The next president will have to make these economic and social challenges as much a priority as the security threats if the latter is not to worsen.

Procedurally, the election process is much improved from previous polls and several safeguards have been put into place to ensure its integrity. Each polling station during the vote was manned by a chairman, two assistants, an official observer for the majority party, and an official observer for the political opposition. The voter roll, complete with a photograph of each voter, are displayed at each polling station, corresponding to the biometric identification cards which were distributed across the country. The chairman and the two official observers in each polling place must sign the back of every ballot before it is given to voters and these same officials are present—along with designated representatives of all the candidates (there are twenty-four altogether)—for the counting of the votes. Presumably they would object if a ballot emerged without their signatures. All five of the officials and observers must sign three copies of the tabulated results, one of which is sent to the Constitutional Court, one to the election authorities at the Ministry of Territorial Administration, and one kept in place. Should no candidate win at least 50 percent of the votes cast, a runoff will be held between the two top vote getters fifteen days after the Constitutional Court certifies the result.

In short, with assistance from international partners, Malians have worked hard to organize elections which likely will prove to be more than “good enough” this time around. Despite logistical and security difficulties, polling places were up and running over the weekend in many of the places where lack of security had made it impossible to hold voting as recently as the local elections in November 2016. Now, with a bit of luck as well as some statesmanship on the part of the contenders, hopefully what will emerge is a president with a clear mandate to pursue peace and consolidate the institutions that are so important not only for Mali’s ongoing stabilization and future prosperity, but also the security of its West African neighborhood and beyond.