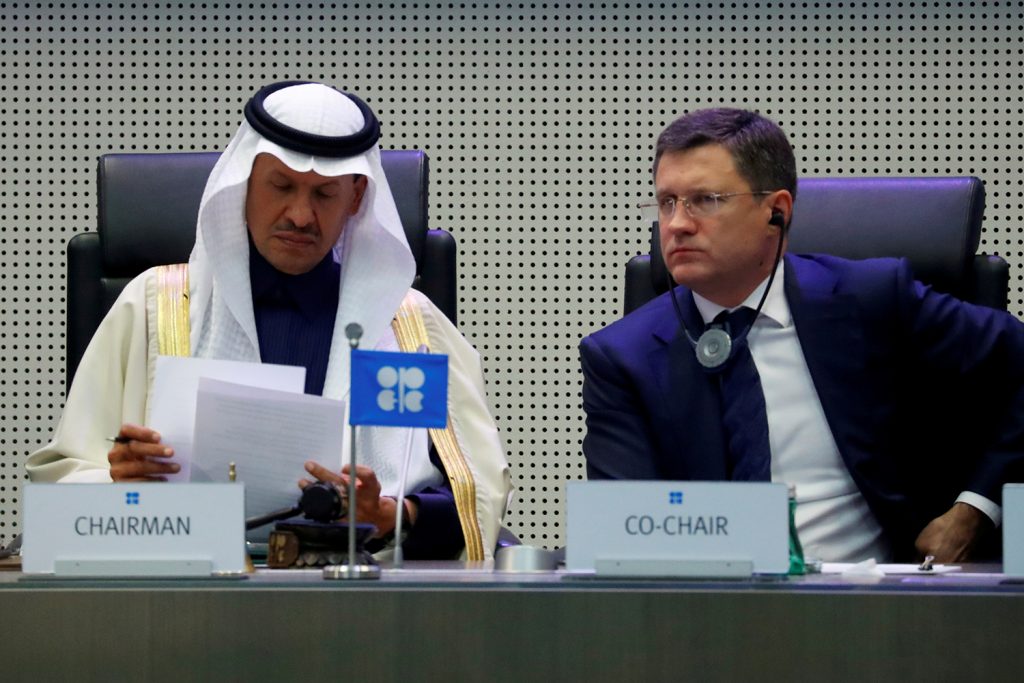 This week in oil markets has an air of suspended animation. Will an international production deal materialize? The answer is “perhaps,” but probably not in the volumes necessary to balance the market and only after Moscow extracts concessions.

We should know by the end of the week. On Thursday, the Organization of the Petroleum Exporting Countries (OPEC), led by Saudi Arabia, and its erstwhile partners, led by Russia, will hold a virtual OPEC+ meeting together with the United States, United Kingdom, Canada, Brazil, Norway, Argentina, Columbia, Egypt, Indonesia, and Trinidad & Tobago. It will be followed up with a Friday meeting of the Group of 20 (G20), chaired by Saudi Arabia.

Since the collapse of the original OPEC+ deal on March 6, a bruising price war has pitted Saudi production costs and access to credit against a more austere Russian budget and capacity for autarky. The double supply-demand shock also draws in other oil producers reeling from falling revenues—not least the United States. US President Donald Trump no longer praises low prices, and, under pressure from the oil industry, has been trying to reach a deal.

Three key obstacles stand in his way: the sheer magnitude of the demand shock, domestic legal constraints, and Russian strategy. Without much power over any of them, Trump and his allies are applying pressure where they can—on Saudi Arabia. Threats of tariffs, blocking Saudi imports, sanctions, and even cutting military support are tough talk, but Riyadh is mostly on board already. To stand up the three-legged stool of OPEC++, the road runs through Austin and Moscow.

The size of the problem

After the collapse of OPEC+ in March, prices sunk to eighteen-year lows. While hope for a production deal buoyed them since last week, structural problems suggest that prices still have quite a way to fall. Oil storage is filling up, and could reach its functional upper limits by May. At that point, pumps will have to stop. Prices will drop further in the interim, until producers have to pay to offload the oil, turning prices negative. That is already the case for some crude qualities. How fast storage runs out will certainly depend on supply decisions, but also how low demand has actually dropped.

Estimates from the International Energy Agency (IEA) and other analysts expect that number to be 20–25 million barrels per day (mb/d) in April, putting global demand down by a quarter from earlier in the year. Depending on the spread of the virus, and the speed of industrial re-opening in China, that number may not be much different in May, before starting to come back in June. To offset falls of such magnitude by any meaningful amount, production would have to come down by more than 10 mb/d for the next five to six months. That assumes demand starts to pick up by the summer—otherwise production must pare back by 15 mb/d or more. Saudi Arabia recently ramped up production to its 12 mb/d limit. Russia produces about 11.3 mb/d. They have no incentive to cut on their own, since low prices will push out other production first, notably US shale. At $15 oil, about 16 mb/d of global production becomes uneconomic, less than 2 mb/d of that combined from Russia and the Middle East. 8 mb/d of it would be American.

Faced with the prospect of effectively shouldering half of global cuts (should they be dictated by the market), many Republican market evangelists are finding their inner mercantilist. Much of that sentiment is selective, calling on Saudi Arabia to act. But since Saudi Arabia and especially Russia insist US participation is key to any deal, the question is what that participation looks like. The options are either regulatory or voluntary.

The regulatory option means dusting off some old books. In 1931, when a bump in US supply met the Great Depression, the Texas Railroad Commission (TRRC) was empowered to dictate state-wide production on a monthly basis to balance the market, and it did so for forty years. The mechanism is still in place, but the TRRC needs two of three commissioners to support action. Despite desperate pleas from independent shale producers in late March, only one currently does—and his proposal to cut 10 percent of Texas’ 5.3 mb/d would not amount to much anyway.

Another option is for the biggest industry players to volunteer cuts. A White House meeting with US oil industry leaders on April 3 made it clear that the majors were not enthusiastic. They would be happy to see smaller independents go bust and then mop up assets afterward. Selectively enforcing safety protocols could pressure the majors to shut in some offshore production, but a more realistic regulatory response will likely mirror North Dakota, which has granted waivers to ease the idling (and later restart) of marginal or uncompleted wells. That kind of flexibility is what drove the US shale boom in the first place.

Perhaps the biggest hurdle to an OPEC++ deal is Russia. Seeing a wider geo-strategic opportunity in the crisis, Russian President Vladimir Putin is less likely to blink than some may hope.

For years, sanctions have helped him to position the Russian economy for autarky, from the oil industry to food production. A falling ruble is making production cheaper in dollars each day, harming imports that Russians don’t consume much of anyway. Currency reserves are healthy, and Russians are more willing than most to endure further austerity. Russian equities reflect this strong position—even energy companies are largely unscathed.

Saudi Arabia was always the junior partner in OPEC+. They shouldered almost all of the cuts, and still had to regularly convince skeptical Russian negotiators to stay in a largely pro-forma deal. Their domestic social contract is delicate and costly. They are desperate, so is Washington, and Putin knows it. Tough talk won’t go far—Russia has called the Saudi’s bluff before.

If US negotiators cannot orchestrate domestic cuts, and must pass off future shut-ins as a contribution, Russia will expect to extract sanctions relief or other concessions (although Congress is unlikely to go along). Given the wave of bankruptcies that started to hit the US shale patch last week, Trump is under pressure to get a deal—but it is still unclear what he has to offer. A fudged deal will not do much to staunch the bleeding in the US oil patch, and even a symbolic deal with Moscow will cost something.

Phillip Cornell is a senior fellow with the Atlantic Council Global Energy Center. You can follow him on Twitter @pcornell10