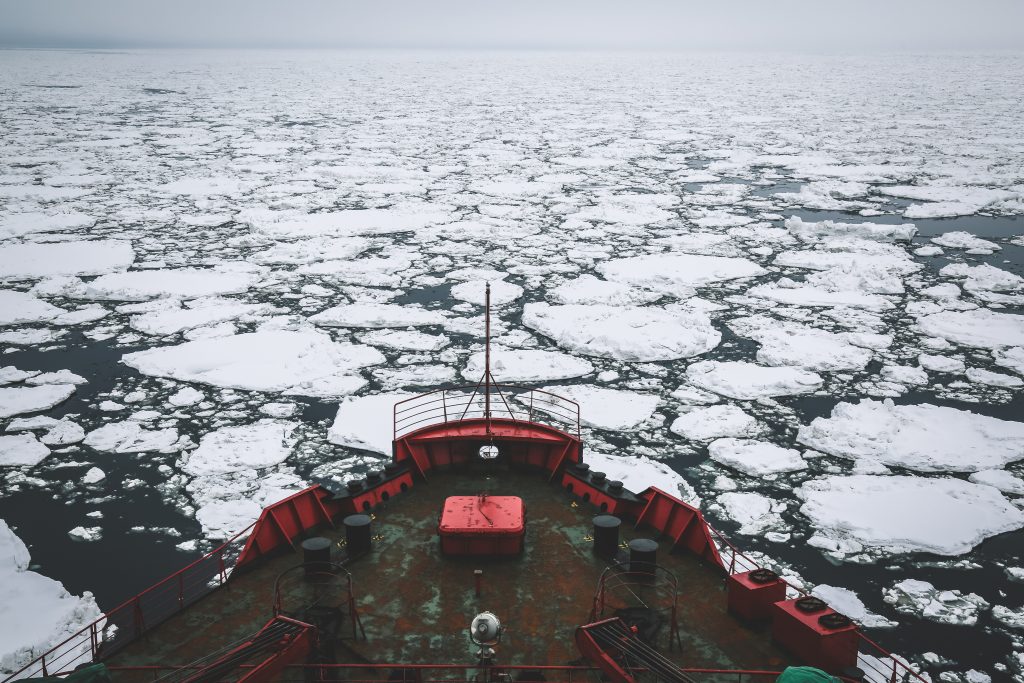 Recently, panic struck the southeastern United States as the Colonial Pipeline, the country’s largest fuel pipeline network, shut down after a cyberattack. With 2.5 million barrels per day of gasoline, diesel, and jet fuel suddenly gone, mass panic buying ensued, sending prices into a spiral of volatility. The incident reminded the nation of its continuing vast dependency on a steady supply of fossil fuels despite significant gains in recent years towards a more diverse energy supply. Given this stark reminder, it should be no surprise that the Arctic region is increasingly coveted for its natural resources and strategic location. The melting of the Arctic ice cover has made the area more accessible to shipping as well as oil and gas extraction, making it increasingly sought after by bordering and distant countries, including China. It is no secret Russia has made the development of the region’s natural resources a priority, while Norway estimates that the Barents Sea holds more than 60 percent of the country’s untapped oil reserves.

The Arctic is on the frontlines of a changing climate and is fundamentally essential to the regulation of the Earth’s fragile ecosystem. It even provides researchers with the means to almost predict the effects of climate change through polar amplification—the phenomenon where changes to our climate tend to produce more extensive changes near the poles than the planetary average—showing what the future will hold. The increased melting of Arctic sea ice and snow allows the darker ocean and land surface to be increasingly exposed, making it less reflective of the sun’s light, causing the Earth to warm further and faster. The continued loss of ice from Arctic landmasses compounds sea level rise and could affect the currents of the oceans and atmosphere on a global scale, with potentially devastating consequences, even to populations living far away from the Arctic.

Significant reserves of oil and gas

With the continued loss of sea ice and the melting of the Greenland ice sheet, the Arctic is also becoming more accessible, allowing states to reach the abundance of natural resources in the region, including large deposits of valuable minerals and fossil fuels, the mining and use of which could further contribute to global warming. The Arctic presents the world’s new “El Dorado” of still attainable natural resources, with an estimated 90 billion barrels of oil (16 percent of global total), 1,669 trillion cubic feet of gas (30 percent), and 44 billion barrels of natural gas liquids (38 percent). But the Arctic’s importance goes beyond just a pool of natural resources creating intense global competition between Arctic powers and near-Arctic powers to have access to these resources.

In addition to new sources of fossil fuels, the Arctic matters because it is a new energy frontier, for clean energy. From wind, solar, and marine turbines, to advances in battery efficiency, the Arctic is the perfect incubator for clean energy. In the fight against climate change, the international community should take every advantage it can to make progress on clean energy technology, and this also includes nuclear. With increasing energy demand, small modular reactors could be deployed in the Arctic. If it can work in the Arctic, powering remote communities in harsh conditions, why not expand it to the rest of the world?

The effects of climate change are also exposing new shipping routes, such as the Northern Sea Route and the Northwest Passage, previously almost impassable due to Arctic ice. The new routes can cause seismic shifts in the global economy due to reduced shipping times and radically altered routes that no longer depend on global choke points such as the Suez and Panama Canals. Protecting, and potentially controlling, these routes and the resources beneath them has led Arctic nations to solidify their presence and secure their territorial claims in the region. Minimizing international competition through the Arctic Council is crucial to safely accessing the opportunities within the Arctic and to preserving regional stability, given the many competing claims and policies in the region. These may lead to conflict both within and beyond the area if not resolved through the acceptance and rule of international law or by diplomatic means.

The Arctic is also home to many different cultures and peoples across the region, many of whom have lived there for millennia. From the Chukchi people along the Bering Sea’s Russian shores to the Sami across Northern Scandinavia, circumpolar populations represent a wide array of human cultures, languages, histories, and religions. The high north also supports hundreds of thousands of species, many of which are endemic to the region, and several are near extinction. The value of this diversity to humanity is inherent in its existence as a part of its common past, present, and future. However, people, plants, and animals are all threatened by the loss of their natural habitats and drastically diminished hunting ranges as sea ice continues to recede at alarming rates.

While the Arctic might seem a faraway place with little significance to most societies, its safety and security are vital to the entire planet. Its unique yet fragile ecosystem, abundance of resources and opportunities, and wealth of human history and cultures make it essential.

Image: An icebreaker moving through the Arctic icefields (Katrin York/Shutterstock)