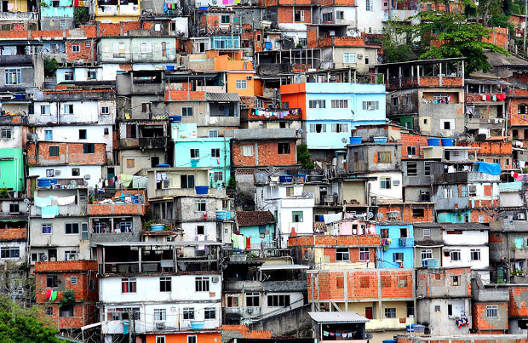 What is the most pressing security challenge facing the world’s megacities? It’s their slums, write Peter Engelke and Magnus Nordenman. Today, they highlight some of the conditions that make them fertile breeding grounds for conflict and instability.

Driven by unprecedented growth in the cities of the global South, urbanization continues to reshape nearly every aspect of modern life. Cities can be places of opportunity, creativity, innovation and peaceful co-existence across cultural and ethnic divides, thereby generating a high quality of life for residents. There is a reason why so many dream of a life in the world’s most prominent cities. Yet the dark side of urbanization is just as evident and, in security terms, perhaps even more significant. Cities generate security challenges at every level of analysis, from the individual to the global.

Among these security challenges, none are more serious than those emanating from the slums of megacities in the global South. Slum formation has been a central characteristic of rapid urbanization in the global South and is expected to continue well into the future. No one knows exactly how many slums exist, nor how many people live in them. Yet all agree that the scale is massive. Mike Davis, author of Planet of Slums, estimated in 2006 that perhaps 200,000 slums existed worldwide, ranging in size from a few hundred inhabitants to more than a million individuals. These concentrations of urban poverty are a global phenomenon, gripping cities from Lagos to Karachi to São Paulo. Indeed, African and Asian cities face some of the most difficult challenges because of the scale of the slum phenomenon and because of how quickly urbanization is accelerating. In a 2008 report on global urbanization, UN-Habitat estimated that over 60% of urbanites in Sub-Saharan Africa live in slums – compared with an average of 37% across the developing world and 15% in Northern Africa. Although Latin American cities are not growing quickly in absolute terms, rapid urbanization throughout the 20th century has left behind a large slum footprint.

From a security perspective, slums are worrisome for two main reasons. The first is the scale of the phenomenon: perhaps a billion human beings now live in slums worldwide, with many more yet to come. The second might be obvious but is worth some examination: slum conditions create serious economic, social, political, and physical insecurities that can spread outward. In a seminal 2003 report on the subject, UN-Habitat defined a “slum” as a settlement with inadequate access to safe water, sanitation, and other critical infrastructure, as well as poor housing, high population density, and the absence of legal tenure in housing. Other features might include weak or absent governance structures (at least from legitimate authorities), widespread legal and physical insecurity, and often extremely limited access to formal employment.

In the final chapter of The Real Population Bomb , Peter Liotta and James Miskel make a useful distinction between vulnerabilities and threats in slums. Threats, they contend, are clearly visible to outsiders. These are discrete phenomena that national police forces or even militaries can target. But a great many security issues that arise in slums do not fit this definition. Rather, vulnerability is the most significant form of slum insecurity. Slum dwellers are highly vulnerable to economic, social, physical, and legal disasters, ranging from chronic hunger and poverty to forced displacement to bodily harm and premature death. These vulnerabilities are significant because they form the background conditions within which discrete threats arise. Left unchecked, large slum-based pockets of vulnerability will create threats extending well beyond slum boundaries. Megacity slum vulnerabilities, Liotta writes elsewhere, contribute to the world’s most significant security challenges, including “anarchy, governmental collapse, ethnic rivalry, cultural grievances, religious-ideological extremism, environmental degradation, natural resource depletion, competition for economic resources, drug trafficking, alliances between narco-traffickers and terrorists, the proliferation of ‘inhuman weapons’ and the spread of infectious diseases.”

Public health provides a good example of the relationship between slum vulnerabilities and threats. Communicable diseases remain a major problem in slums because of a lack of potable water and inadequate sanitation systems. As slums are often located on unsuitable land (e.g., marshes and flood plains), poor environmental conditions enable disease pathogens to breed. Because of this, public health practitioners worry about the potential for these pathogens to arise in slums and spread to other parts of the city. And because air travel allows pathogens to be exported abroad, cities can become hubs for global pandemic outbreaks. The speed of these processes can overwhelm international disease detection, response, and containment systems.

Slum vulnerabilities become discrete security threats in more violent contexts as well. The social realities of mega slums–high unemployment, endemic poverty, and chronic if low-level violence and crime–allow for relatively easy recruitment of foot soldiers and collaborators into criminal and terror networks. Young males in particular may find it hard to resist joining such networks, owing to their lack of opportunities in the city’s formal economy. These networks flourish in governance vacuums created either by the absence of government services or where such services are malicious. (Many governments in Africa, for example, have tended to view slums as illegal settlements and have thus been reluctant to provide services, even where the capacity to do so exists.) Moreover, municipal policing is often absent or heavy-handed, alienating slum residents. In many cases, governments are simply overwhelmed by the speed and scale of slum formation, preventing the extension of various services. Indeed, in many slums, various gangs and criminal networks effectively replace the state, providing the only security that is available to the people living there.

Such networks can spread outward, becoming threats to national and international security in a fashion akin to public health pandemics. As Liotta and Miskel argue, a major security fear is that governance vacuums will lead to “contagion effects” abroad, where slum-based crime and terror syndicates can threaten international order. Further, as described in Out of the Mountains , David Kilcullen’s recent book, such urban-based networks have already proven highly adaptable and sophisticated at the intercity scale. As illustrated by the 2008 Mumbai terror attacks, some groups have achieved a level of organization and firepower (as well as social and political legitimacy within their home territories) that can match national governments. Modern communications and transportation allow these actors an almost global reach, and illicit goods, narcotics, trafficked persons, and terror strikes can end up far from their place of origin (a mega-slum in many cases). Moreover, these groups tend to understand the intricacies of slums better than the state does, which in many cases has not even bothered to map them.

Modern warfare is also being reshaped. The Iraq War, for example, saw the bloodiest fighting in cities, and insurgent leaders found recruits and a base of power in poor and underserved urban areas such as Sadr City in Baghdad. Indeed, according to Tom Ricks, the author of Fiasco, the battle of Fallujah was the largest urban battle fought by US forces in over 40 years. In operational terms, mega slums present extremely complex challenges for forces trying to secure them. They offer an almost unlimited range of avenues of approach, sites that can serve as strongholds, and short lines of sight. Urban environments are also likely to contain a high number of non-combatants as well as a number of soft targets that are difficult to secure and monitor. Given these dangers, it is unsurprising that military professionals from around the world express reservations about fighting in cities.

In addition, slums present challenges for effectively responding to natural disasters. After the 2010 earthquake in Haiti, the damage done to the city’s already-poor infrastructure, communications, and housing, made life virtually impossible there, triggering high levels of violence and unrest and frustrating relief efforts. Unsurprisingly, the United States was forced to deploy significant military assets, including a Marine Expeditionary Unit and an aircraft carrier, to restore order in Haiti’s cities and deliver relief.

Despite the long list of security challenges emanating from slums, there are nevertheless signs of progress in some of the global South’s most difficult cases. Medellin, for instance, has become a success story for reducing the chronic violence that once made the city the world’s murder capital. Local and national leaders applied a novel combination of measures, directed at the city’s poorest districts, to effect change. These included heightened security, innovative public architecture, improved public transport systems, and more transparent and effective governance – all aimed at improving conditions in the city’s slums, and therefore building trust with the city’s poorest residents. Local and national law enforcement agencies and military forces played a key role in establishing and sustaining security in Medellin, but these efforts would not have been successful without imaginative inter-sectoral and cross-departmental approaches that mirrored the complexities of Medellin’s urban fabric. This suggests that limiting the space in which security challenges can flourish in mega-slums will require more than traditional security responses. It will require working with a wide range of actors to establish high-quality governance structures, dependable infrastructure, reliable access to public services, and ultimately to bring genuine social and political inclusion to slum residents.