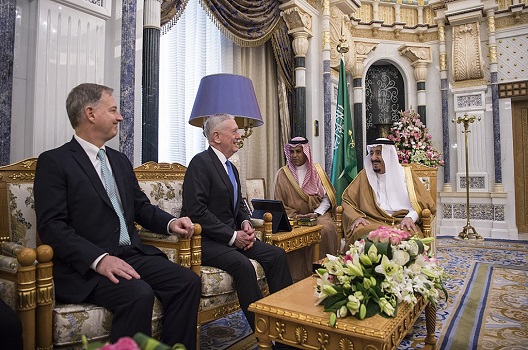 The Kingdom of Saudi Arabia (KSA) and ally United Arab Emirates (UAE), pledged decisive victory when they entered into war in March 2015 against Yemen’s Houthi rebels. The results thus far have not been the Houthis’ defeat, but tens of thousands of deaths, a cholera epidemic and famine — what the United Nations has deemed “the world’s worst humanitarian crisis.”

One way to end the crisis is for the United States to withdraw its support for the war, compel the Saudi-led coalition to accept a ceasefire and ensure a peace process that keeps millions more from unnecessary suffering.

United Nations (UN) mediators have already set a date in Geneva (Sept. 6) to discuss the Yemen crisis. These talks should begin by arranging a ceasefire, followed by the transfer of the Houthi-held port of Al Hudaydah, where an estimated 70 percent of Yemen’s food and aid supplies flow, to UN control. Subsequent talks should focus on a political process and stabilization efforts.

The Houthis seem willing to enter negotiations, but the Riyadh-led coalition has remained defiant.

Concern over the Islamic Republic of Iran’s (IRI) support for the Houthis was one reason the KSA backed the government of Yemen’s President Abd-Rabbu Mansour Hadi. Echoing the Saudi and Emirati portrayal of the Houthis as Iranian proxies, the Trump administration has continued to back the coalition as part of a broader pressure campaign against Tehran.

However, the war has only strengthened what had been relatively minor bonds between the Houthis and Iran, making Saudi concerns self-fulfilling. Iran, for its part, has found a relatively inexpensive way of targeting Saudi Arabia, which is spending significantly more resources to continue the war.

One of the most horrific attacks occurred last month. A bomb used by the coalition in a devastating attack on a school bus on August 6, which killed dozens of children, was sold as part of a US-approved arms deal with Saudi Arabia. At first, Saudi officials asserted that the bus was a “legitimate military target,” alleging that the Houthis train child soldiers and use civilians as human shields, only to later express regret and conclude a mistake had been made.

In March 2016, a strike on a Yemeni market, reportedly by a US-supplied precision-guided MK 84 bomb, killed 97 people and wounded dozens. In October of that year, 155 people were killed and hundreds more wounded in a similar attack on a funeral hall. That bomb too, came from the US.

And on Aug. 23, another 30 people, including 22 children, died in Saudi-led coalition airstrikes on al-Duraihmi district, 20 kilometers from Hodeida.

American, British and French industries remain the biggest suppliers of arms to Saudi Arabia while France and Italy are the second and third largest suppliers to the UAE.

Recent developments, however, suggest that a reluctance to arm the coalition is spreading. Amid mounting public pressure, European states from including Spain, Greece, and Norway have suspended the sale of lethal military goods to the coalition. And in Austria, the Netherlands, and Belgium, licenses for arms sales to the KSA have repeatedly been denied. Germany’s coalition government, too, has suspended approval of arms exports to any country participating in the war in Yemen.

During President Barack Obama’s two-term tenure, the US offered Saudi Arabia more than $115 billion in weapons, more than any previous administration. However, concerned about human rights abuses in the aftermath of an attack on a funeral hall in 2016 that killed more than 140 people, the Obama administration banned the sale of precision-guided military technology to the KSA.

However, in March 2017, then-Secretary of State Rex Tillerson overturned the ban and by May, President Trump finalized a $110 billion arms deal with the Riyadh.

US Secretary of Defense James Mattis has previously stated that the US does not make targeting decisions for the coalition, “I will tell you that we do help them plan what we call, kind of targeting… we do not do dynamic targeting for them.” Despite the rhetoric, evidence suggests that the US supports the KSA and UAE naval blockade and assists in aerial targeting, intelligence sharing, and mid-flight aerial refueling. Meanwhile, small teams of US Special Forces are on the ground.

Secretary Mattis has insisted that the US is “constantly reviewing” the support given to the coalition. Congress, too, has become increasingly skeptical about the continued arms sales and lawmakers have urged officials to explain US support. Congress has never specifically authorized the use of US force in Yemen, as the Constitution requires.

Earlier this year, a bipartisan group of senators unveiled legislation calling for the ‘removal of United States Armed Forces from hostilities in the Republic of Yemen that have not been authorized by Congress.’ In the wake of increased civilian casualties, congressional opposition to American support for the coalition continues to increase.

In a statement, Democratic Senator Chris Murphy of Connecticut asserted, “Either the Pentagon should be 100 percent certain that US weapons and funding aren’t being used to commit war crimes in Yemen, or we should cut off US support right now.” A House colleague, Democratic Representative Ted Lieu of California appealed to the Defense Department inspector general, writing, “I am deeply concerned that continued US refueling, operational support functions, and weapons transfers could qualify as aiding and abetting potential war crimes.”

Congressional opposition to the Yemen war is bipartisan.

“Our humanitarian principles and our national security interests require that the United States use its influence to end the civil war in Yemen and address the world’s largest humanitarian crisis,” stated Republican Senator Todd C. Young of Indiana. In an op-ed, Republican Senator Rand Paul of Kentucky stressed, “We must stop being co-conspirators in the deaths of innocent people. We should begin by fully debating and voting on war and returning to a constitutional foreign policy.”

The comments, letters, statements, and series of tweets from leaders on both sides of the aisle make clear: facilitation of this war may actually diminish US security by stoking anti-Americanism and creating a bigger haven for terrorism. As a former US ambassador to Yemen has said, “It is not the responsibility of the United States alone to resolve this crisis, but American leadership is needed to bring it to an end. We shouldn’t mistake the absence of headlines for an absence of urgency.”

Masoud Mostajabi is an assistant director at the South Asia Center of the Atlantic Council. You can follow him on twitter @MMostajabi1