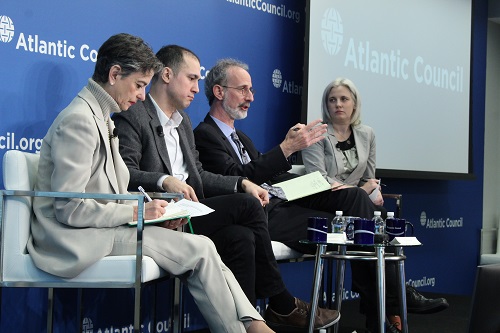 In the wake of record floods in Iran that have killed more than two dozen people, new attention has focused on the environmental challenges facing the Middle East.

The issues facing the region are complex and reflect a number of factors, according to experts who spoke on March 27 at the Atlantic Council. Among them are climate change, water scarcity, mismanagement, and poor governance. These challenges have become politicized in both the region and in the United States, and have undermined international cooperation to address them.

Water has been a source of conflict since ancient times, explained Peter Gleick, president emeritus and co-founder of the Pacific Institute. Water has been a trigger for conflict, a weapon used during conflict, a target and casualty of war. According to data from the Pacific Institute, there is an increase in the actual number of violent events associated with water resources. While this increase is visible throughout the world, the greatest number of conflicts are in Western Asia, which includes the Middle East.

Rapidly changing climate patterns have exacerbated problems with record droughts, floods and heat waves, said Caitlin Werrell, chief executive officer of the Council on Strategic Risks and co-founder of the Center for Climate and Security. For the Middle East and North Africa (MENA) region, the primary risks manifest through temperature increases, erratic rainfall, and sea level rise. These threats will put major strains on food, water, energy, and healthcare systems of countries throughout the region, increasing state fragility, unrest, and the likelihood of conflict.

Werrell cited case studies in Egypt and Syria that foreshadowed the 2011 Arab Spring uprisings. Egypt, a net wheat importer, experienced a 300 percent increase in the price of bread in 2010. Global wheat prices rose due to droughts in China and heat waves in Russia, which devastated harvests. The rise in bread prices led to “protests and riots, particularly in rural areas… The rise in food prices helps broaden the appeal for the country’s spring, beyond Tahrir Square and urban areas,” Werrell added. She also warned that cities such as Alexandria are extremely vulnerable to sea level rise. A half-meter increase could displace two million people and introduce salt water into the Nile Delta where Egypt conducts 30 – 40 percent of its agriculture, employing a third of its population. In the Syria case, extreme droughts from 2007 – 2010, were made three times more likely due to climate change and caused 75 percent of the most vulnerable farmers to experience total crop failure, displacing 1.5 – 2 million people.

Regarding Iran, the director of the Future of Iran Initiative, Barbara Slavin commented, “Climate change is clearly a major threat to the entire world, but it is also a convenient political excuse for people that do not want to address their own mismanagement of resources.”

Kaveh Madani, a former deputy head of Iran’s Department of the Environment who is now a senior fellow at Yale University agreed that “Iran is ahead of the curve in terms of problem production,” but said that other countries in the region are “not any better, some indeed much worse.” He gave as an example the United Arab Emirates (UAE), which is not suffering from economic sanctions or isolation from the West. However, the UAE has overbuilt its cities and must contend with air pollution and brine from desalinization plants sullying the Persian Gulf.

In some ways, Iran is ahead of the region because of greater environmental consciousness. Madani suggested that the drying up of water sources such as Lake Urmia in Iran’s northwest, was a “turning point.” There are now 850 registered environmental NGOs in Iran, but their work is hampered by politicization and securitization of the issue, he said. Iranians, particularly women, “are very active in the environmental space but people don’t know what will get them into trouble.” A number of environmentalists are in jail and the head of a prominent NGO, Kavous Seyed-Emami, died in prison last year under suspicious circumstances.

Madani, himself, was forced to leave Iran a year ago after being interrogated. The Iranian government is suspicious about the environment and the way in which hostile governments are trying to use the issue to undermine support for the Islamic Republic, he explained. Madani criticized a recent message from the State Department’s Special Representative for Iran, Brian Hook, which blamed many of Iran’s problems on the over-construction of dams. Many of those dams were planned before the 1979 revolution, Madani noted.

The ability of environmental issues to mobilize and unite people is also something that frightens authoritarian governments, he explained. “It creates paranoia. [Security services] think that every NGO which is in touch with outsiders has an agenda.”

In the past, the US and Iran had a robust program of academic exchanges on issues such as water management, but such programs were halted after the Trump administration came into office. While there is talk of reviving such programs, it would be difficult in the current tense environment following US withdrawal from the Iran nuclear deal.

Werrell suggested that one answer might be “data diplomacy,” sharing information from improved technology such as the ability to measure ground water levels from satellites in space, to help countries better manage limited resources.

Gleick cited other advances such as the ability to grow more food with less water, storm water capture, and waste water treatment and reuse which could help alleviate the stresses of so-called ‘peak water,’ a condition in which the supplies of fresh water are not replenished at the rate they are consumed. Gleick also spoke of “green financing” to support bottom-up ventures to help vulnerable countries deal with environmental challenges.

Masoud Mostajabi is assistant director at the Middle East Programs of the Atlantic Council. Follow him on Twitter: @MMostajabi1.