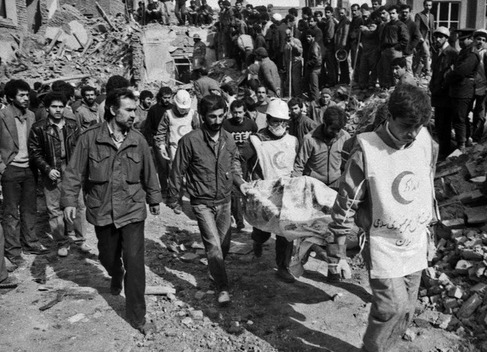 The aftermath of an Iraqi missile attack on a Tehran neighborhood in 1987 (Tabnak.ir)

As the United States increases its pressure campaign against Iran, the country’s missile program has emerged as a major source of contention. However, Iran is unlikely to heed US demands to halt its development of ballistic missiles, which comprise the backbone of its defense doctrine.

In order to better analyze Iran’s defense strategies, it is important to note that for Iran, the line between security concerns and national pride is blurred. Iran’s traumatic historical experiences play a critical role in shaping its approach to defense and in particular, to missiles.

In the twentieth century alone, Iran has endured three foreign invasions. Officially a neutral country during both World Wars, Iran’s territorial integrity and political independence were violated repeatedly by foreign powers which used Iran as a platform to support their war efforts. These violations resulted in famine, political instability and havoc.

The famine of 1917 – 1918 during World War I killed half of Iran’s then population of 20 million. During World War II, Iran was again invaded from both its north and south, by Soviet and British forces, respectively. Under pressure from the Soviets, Britain and the United States, the founder of the Pahlavi dynasty, Reza Shah, was forced to abdicate and his young son was placed on the Peacock Throne.

After the war, the Soviets not only refused to leave Iran immediately but supported Communist-leaning separatist groups, including Azeris who set up a Moscow-backed government in the Iranian portion of Azerbaijan that lasted for several years. Such episodes of humiliation have led to a collective sense of victimization among Iranians that co-exists with pride in their ancient culture and long history of unified statehood.

A year after the 1979 revolution, which emphasized independence from both the Communist East and the capitalist West, Iraq invaded Iran. Official United Nations reports indicate that Iraq began thesystematic use of chemical weapons against Iranian troops and population centers as early as October 1983. By March 1984, there were forty-nine reports of chemical attacks. By the end of the war in 1988, Iraq had used over 100,000 chemical munitions against Iranian troops.

Nevertheless, the UN ignored Iran’s repeated requests for fact-finding missions, and while the Security Council condemned the use of chemical weapons on the battlefield, it did not initially condemn Iraq as a violator of international law. Over the course of the war, Iran suffered more than 100,000 casualties related to the use of chemical arms. Still today, more than 70,000 Iranians are receiving medical assistance for the long-term effects of exposure to nerve, mustard and blister agents.

These experiences created intense distrust among Iranians that international institutions would stand up for their rights. As former BritishPrime Minister Stanley Baldwin (1935 – 1937) noted: “Will any form of prohibition of bombing whether by convention, treaty, agreement . . . Be effective in war? Frankly, I doubt it.” This was echoed by Iran’s late President Ali Akbar Hashemi Rafsanjani when he complained that “the moral teachings of the world are not effective when war reaches a serious state and closes its eyes to the violations which are committed in the battlefield.”

While Iran contends that it is abiding by UN Security Council Resolution 2231—which “calls upon” but does not require Iran to halt development of missiles capable of carrying nuclear warheads—Iranians have learned not to rely on international law and institutions to deter potential aggressor. This has played a critical role in Iran’s sense of strategic loneliness.

Similar to German V-2 attacks on London and the bombing of Dresden in 1945, Iraqi forces launched a variety of Scud missiles on Iranian cities to try to weaken the moral of Iranians to fight. The attacks, which Iran reciprocated but to a much smaller extent, became known as the “war of the cities.” The “pilotless bombardment” of cities, as Winston Churchill once noted, meant that the “man going home in the evening never knew what he would find . . . The blind impersonal nature of the missile made the individual on the ground feel helpless.” During this period, Iran lacked any early warning or anti-ballistic missile defense system. About 1,600 citizens of Tehran alone were killed during these raids.

While in the early stages of war, Iraqi missiles could not reach the capital Tehran, with foreign assistance, Iraq increased the range of its missiles by reducing the size of the warheads. The Al-Hussein missile could hit Tehran and destroy apartment buildings. It is estimated that around one million residents of Tehran left the capital each night to seek shelter on the outskirts of the city; some even died as the result of attacks by venomous reptiles.

For many in the West, such traumatic experiences may simply be intangible concepts or old news that seems no longer is relevant. However, for hundreds of thousands of Iranians who lived through the eight-year Iran-Iraq War, these memories remain vivid and horrific. The psychological effects of these attacks are a major driving force behind Iran’s current missile policies.

Henry Kissinger noted in 1958 that defense policies are inseparable from peace policies; in this case, Iran’s missile program is seen as a means of deterring aggression and the recurrence of such awful episodes.

Sina Azodi is a PhD student in political science at the University of South Florida, and a research consultant at Princeton University’s Program on Science and Global Security. He received his Bachelor’s and Master’s degree from the Elliott School of International Affairs, George Washington University.He focuses on Iran’s foreign policy and US-Iran relations. Follow him on Twitter @azodiac83.