Iranian experts in Tehran see the Joe Biden administration’s approach toward Iran and the Joint Comprehensive Plan of Action (JCPOA) in the context of his government’s overall foreign policy and its desire to extricate itself from military conflicts in the Persian Gulf.

The United States’ current approach is reminiscent to the “Vietnam Syndrome” that affected American administrations after the US withdrawal from Vietnam in 1975 and is arguably a reaction to the militarization of US foreign policy after the September 11, 2001 terror attacks. It seems that the US is now ready to resume a more “humble” approach after the poor results of its post-9/11 interventions in Afghanistan and Iraq. The rise of China and other threats such as Russia also have influenced this shift.

Dr. Mahmood Sariolghalam, a well-known Iranian professor of international relations at Shahid Beheshti University, believes that a new US consensus has emerged on China and Russia, changing from a policy of “competition” to one of “measured confrontation.” Thus, US policy towards Iran should be seen in the context of the Biden administration’s “Pivot to Asia.”

Nevertheless, the Middle East remains important because of its geostrategic position at the crossroads of Europe and Asia. Arab allies of the US and now also Israel—due to the 2020 Abraham Accords—are dependent on the US for security. Failed states like Syria and Yemen are potential breeding grounds for terrorists who could attack the US and its regional allies. Although the US is no longer dependent on oil from the Persian Gulf, any long-term disruption there could erode the global economy. There are also concerns that Iran’s nuclear advances could trigger a regional nuclear arms race.

Biden administration critics believe that the US needs a post-Afghanistan strategy to bring order to the Middle East and that a vacuum is dangerous. Therefore, Washington must encourage its allies and partners to address regional grievances to legitimize a new order. US policymakers should be cautious and prioritize stability over end-of-conflict agreements.

However, doubt and uncertainty over the US commitment to the Middle East is perhaps the best strategy for achieving stability. At the very least, this skepticism forced the two biggest competitors of the region to talk. The recent thawing of Iran-Saudi relations has been accelerated by the emerging perception of a waning US commitment to the region.

To avoid the damaging consequences of a smaller US footprint in the region, such as the rise of the Islamic State of Iraq and al-Sham that followed the US withdrawal from Iraq in 2011, Washington needs to encourage regional diplomacy, particularly between Iran and Saudi Arabia.

Comprehensive security talks in the Persian Gulf could also help shift the security burden away from Washington. The US must continue to play a supportive role to achieve success through such efforts.

In May 2020, Jake Sullivan and Daniel Benaim advocated a focus on interregional dialogue before Biden was elected. Now national security adviser, Sullivan has prioritized a China containment policy. Secretary of State Antony Blinken and US Special Representative for Iran Rob Malley emphasize multilateralism and view the rapid revival of the JCPOA as a means of bolstering Biden’s slogan that “the US is back.” An agreement that is defensible to Republican critics would alleviate US concerns about Iran’s nuclear program for the next decade and allow the US to focus on China.

The US has expressed a desire for a “longer and stronger” JCPOA but acknowledges that a return to compliance with the original deal is a required first step. Most US allies in the Persian Gulf ask the US to continue to contain and confront Iran. Tehran has an opposing vision for the region in which there is no place for the United States.

Still, the Biden administration wants its regional allies to stop opposing the nuclear deal by interacting with Iran so that the US doesn’t have to pay for its Iran engagement with new commitments. The US benefits greatly from the current diplomacy between Riyadh and Tehran if it leads to a significant reduction of tensions.

Seyed Hossein Mousavian, a former member of Iran’s nuclear negotiating team, believes that Iran wants to improve relations with Saudi Arabia whatever the fate of the JCPOA, while Riyadh is waiting to see if the agreement is restored. For Tehran, re-establishing diplomatic relations and improving bilateral relations with Saudi Arabia is a priority, while Riyadh is more concerned with the nuclear deal and neighboring Yemen.

Of course, US allies in the region, including Saudi Arabia, have realized that Biden is unable to add regional dialogue to the nuclear talks, and the fragility of the discussions means that there is no bandwidth to discuss Iran’s role in the region. That’s why the US’s Arab allies have begun dialogue with Iran before seeing progress on restoring the JCPOA.

Reducing tensions between Iran and Saudi Arabia increases the likelihood of the JCPOA’s success (if it can be revived) because the opposition and pressure of US allies in the region was one reason for the failure of the original deal.

Javad Heiran-Nia is director of the Persian Gulf Studies Group at the Center for Scientific Research and Middle East Strategic Studies in Iran. 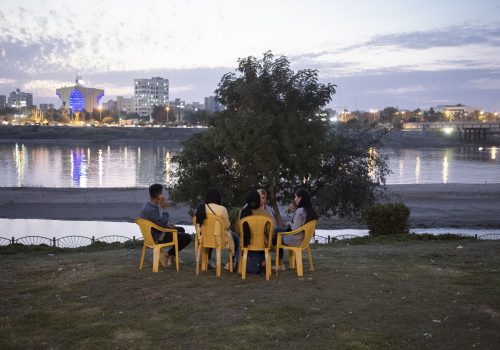 Among the challenges encountered by the Islamic Republic of Iran, climate change looms as one of the most serious, disrupting, and even life-threatening issues facing both rural and urban populations. This threat has worsened at a time when Iran is politically polarized, ideologically fractured, and economically embattled.